Humour: In Their Cups!


Who would have thought that cup sizes could get so interesting, so controversial, so confusing. No, I’m not talking bras, here - I’m talking about the drink options available at your local coffee shop. How much is enough? How much in a cup - and what do you call it? And why do the sizes keep changing? Ask Tim Horton’s; they are adding even more confusion to your day.

You would think that cup sizes are standard, right? Wrong. A medium coffee at Second Cup gets you sixteen fluid ounces; at Tim Horton’s it’s fourteen. Starbucks, on the other hand, don’t have a “medium” coffee. You’ll have to decide between a “tall” (12 fl. oz.) and a “grande” (16 fl. oz.) Now, I don’t know about you, but I’m not playing that particular game. I’m not using their upscale, yuppy terminology. The names for Starbucks’ five coffee-sizes, if you’re never been, have the following pretentious tags: short, tall, grande, venti, and trenta. These are coffee sizes? They sound like shirt options to me. I’ll ask for a medium and let them translate.

What about those pompous names, anyway? Does Starbucks think they can charge more for their coffee just because customers get a frisson (along with that caffeine jolt) from their up-scale shopping experience. You are ordering some of those cup sizes in Italian, after all - grande means large, venti means twenty (fl.oz.) and trenta means thirty. Italians know their coffee, don’t they? So, we’ll pay more for our coffee because we feel more sophisticated than your average caffeine-imbiber?

Speaking of non-standard sizes, your small, medium, and large Second Cup hot drinks have four fluid ounces less than the small, medium and large cold drinks. Is it to do with the ice? Can we not standardise hot with cold?

Confused? No, because like me you avoid all this trendy nonsense and stick to Tim Horton’s. In their franchises you only have to deal with commonsensical nomenclature: small, medium, large and extra-large. Right? Well, up until recently, that is. But now - five years after Second Cup changed its coffee sizes - Tim Horton’s have decided to join the brave-new world of market standardisation, and, in the process, expand the legions of the confused and the irritable. Wasn’t caffeine supposed to make you less irritable?

Back in 2006, by the way, when Second Cup made its switch, PR spokeswoman Rachel Douglas explained that their old sizes (small, medium, large and jumbo) were an apparent problem:

“It made ordering confusing,” she said, “because some people would want small and say medium, or want medium and say large." Say what? The former options included small and medium, but some people who wanted small would say medium? Well, this thing is more confusing than we actually thought. 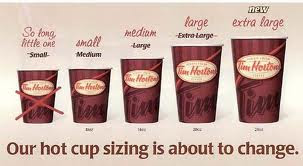 So, here we are; Tim Horton’s have decided to add a new, even larger cup of coffee to their menu – it holds 24 fluid ounces. Good idea? Well, OK, if they had been smart enough – actually, they didn’t have to be smart, just rational – to come up with a fresh tag for the newest size. How about “humungous”, or “gigantic”, or “titanic”? No, they have actually decided to call it “extra-large”. Not a problem, you say? Well, it is - not only because it will challenge even the most-disciplined bladder on its daily commute, but because of the name. They already have an “extra-large” size, you see. Instead of adding one name, they’re shifting one, and changing four different sizes. So the current extra-large is going to be called “large” from now on. The large will be medium; the medium will be small; and the small will be extra small. Got that?

Who came up with this idea? Not a customer, I’m willing to bet, or an employee who actually works in one of their franchises; these people will have to deal with the fallout. No, this decision would have been made by a market researcher. And nobody’s going to be confused or annoyed; they know that because they’ve done “market research” with their loyal customers. Does it make sense to you? Think about it.

“I’ll have a medium double-double and a dutchie, please,” says the half-asleep customer at his local Tim’s, early on a work-day morning.

“The old medium, sir, or the new medium?”

“The medium is now small. If you really want your old medium, it’s actually gonna be a large.”

“Whatever … just give me my regular, OK?”

“You want regular? You mean one cream/one sugar? Or a small?”

“No! Double-double. And medium.”

And while we’re at it, they’re now calling the 8 fluid ounce cup an “extra small”. Isn’t that an oxymoron? Extra large almost sounds right as a name; but how can the smallest cup be an “extra” size. Wouldn’t “smallest” be better? Or “teeny-weeny”? Or “caffeine-for-wimps”?

Tim Horton’s has announced that the cup-size changes are good because it brings their sizes more in line with competitors - including Starbucks, Second Cup and McDonald's. The standardisation argument. The American way. More beans for your buck. The price of the coffee stays the same; it’s the names that change. What’s in a name? Confusion and contention, I say. And the sizes are still different; unlike Second Cup and Starbucks, Timmies do ten-ounce and fourteen-ounce sizes, instead of twelve and sixteen. Plus ça change, plus c'est la même Jo.

Maybe it’s time to switch to Timothy’s World Coffee; they have good-old cup sizes: small, regular, medium and large. No - wait a minute – why do they have that regular size in between the small and the medium? Isn’t regular the same as small? It ought to be quite simple, shouldn’t it? It may seem like a small thing to you. But for Tim Horton’s, I predict - at least in the medium term - this could turn out to be a large problem. Maybe even extra large? The price, I’d say, for their double-double-think.
Posted by Clive Baugh at 18:43