Earlier this year my family took our March Break holiday again in Cuba. One of the day-trips I hoped to make whilst there was a second visit to Hemingway's house - Finca Vigia (Lookout Farm) - where he lived for twenty years, between 1939 and 1960. I had been at the house (now a museum)  first in 2010; but I had missed seeing Pilar, his 38-foot Playmate cabin-cruiser boat built by the Wheeler Shipyard in Brooklyn, New York.

I met two fellow-Canadians in Jibicoa, our resort on the north coast of Cuba - located about an hour's drive east of Havana. They were keen, too, to do a Hemingway pilgrimage. Not only did we make a trip together to Finca Vigia, we also moved on from there to the village of Cojimar - a fishing village, where the Hemingways often docked their boat. And on the following day, I returned to Cojimar with my wife and sister-in-law.


What follows are photographs I took on these two visits. The first day was dull and overcast; but the next was hot and sunny - a chance for me to go back there and re-do some shots in bright sunlight. So here they are: some photographs of Cojimar, and some observations about Hemingway's links to this quaint Cuban fishing village.

Ernest Hemingway used Cojimar as an alternate site for the docking of his fishing-boat Pilar during the 1940s and 1950s. He also used the main harbour in Havana. Cojimar is a small fishing-village on the north-coast of Cuba. It sits about 10 km east of Havana in a bay. The harbour is at the mouth of Rio Cojimar, just before it flows into the protected bay. The village was founded here in the 17th-century, when houses and ranches began to be built around a Spanish fort, Torréon de Cojimar, erected in 1649 as part of the extended fortifications used to protect the coastline near Havana.

An invading British army landed here in 1762, on its way to attack Havana. And in 1994 thousands of "rafters", desperate to escape the Castro regime, left from the sheltered waters of its rocky bay, to attempt a treacherous voyage across the Straits of Florida to the United States. Cojimar is on the western side of the bay; on the opposite side is a large housing estate of pre-fab apartments called Alamar - the birthplace of Cuban rap and the site of an annual hip-hop festival.


After a long day of deep-sea fishing out in the Gulf Stream - which is not too far out from the coast - Hemingway liked to stop by La Terraza de Cojimar. It's a restaurant/tavern on Marti Real - the main street of the village. This was - and still is - the main restaurant and drinking establishment in Cojimar. It was opened in 1925. It soon became well-known; famous international visitors would drop by, and Cuban film stars of the day could be found there.

La Terraza de Cojimar was a favourite haunt of Hemingway's and, as usual with him, he had a favourite corner on the terrace that he always sat in. The proprietors have set up a small bronze bust of the famous writer in that corner. On two long walls in that same room of the restaurant, there is an impressive display of black-and-white photographs of Hemingway in Cojimar. 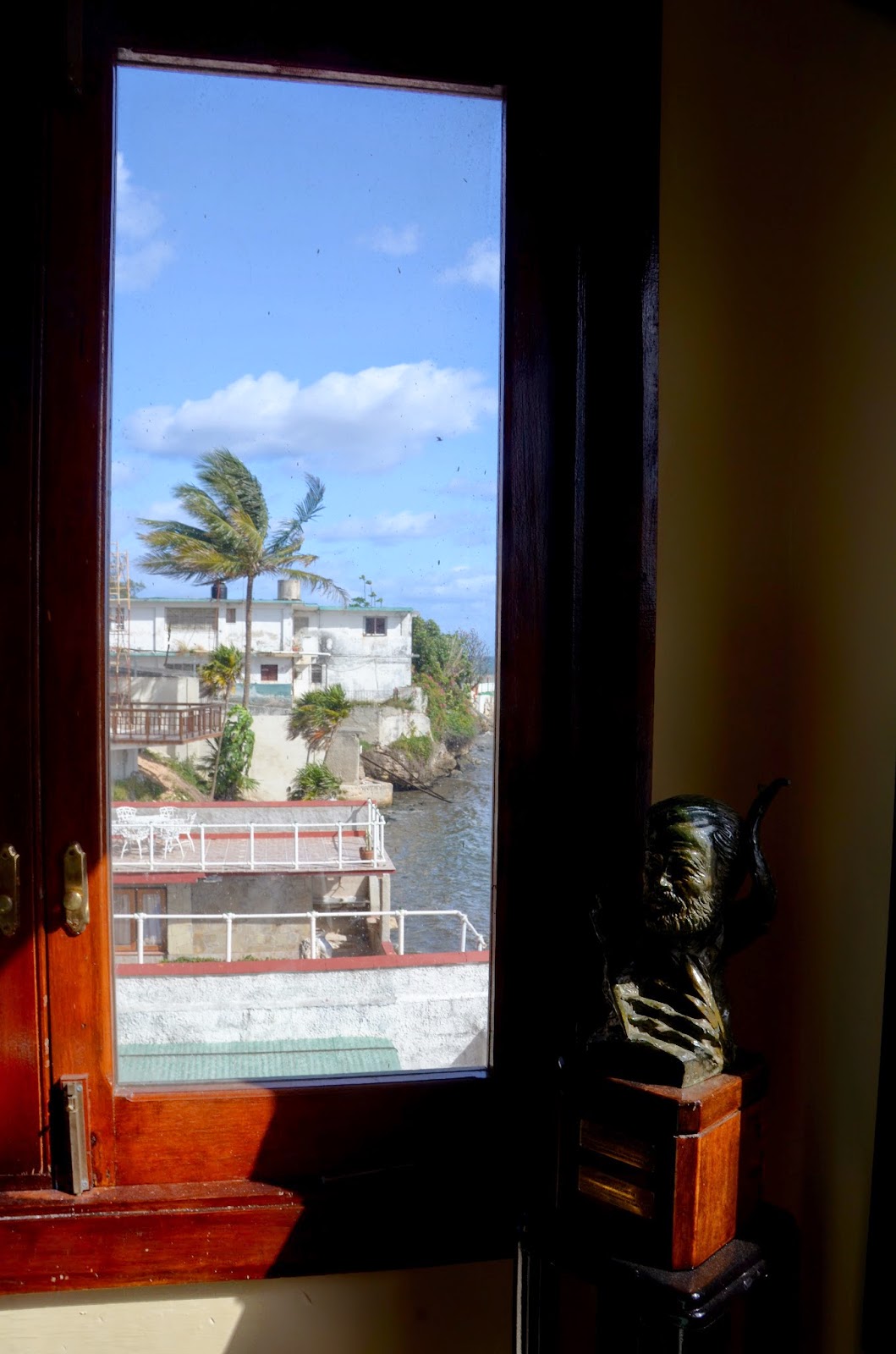 Hemingway was a gregarious and generous man. He liked to spend time here in la Terraza with the local fishermen. He spoke Spanish fluently - having spent most summers in the 1920s in Spain, following the bullfighting season. He would swap tales with the locals about their exploits fishing out on the ocean. Often his first-mate, Gregorio Fuentes, who lived in this village, would be on hand in the tavern.

Cojimar became the model of the fishing village in Hemingway's famous novella The Old Man and the Sea. Many deep-sea fishermen used its harbour as their home base. Cojimar was the site of a famous Great White Shark catch in the 1940s. There is some doubt as to the facts of this catch, but it is considered a contender for the largest Great White Shark specimen of all time.

The fishing story Hemingway tells in this book is based on an incident that he heard about back in 1936. In the late 40s he had started work on "a big book". He often referred to it as his "sea, air and land" trilogy. He toyed with this epic for many years, but eventually had to abandon it. But he did complete much of the first volume - the sea book. It was structured in four sections, set in Bimini and Cuba. The first three sections would eventually be published posthumously as Islands in the Stream (1970) under the control of Hemingway's fourth wife, Mary Welsh Hemingway. Ernest took the plan for the fourth section and re-worked it as a separate piece of fiction - a novella. He had begun serious work on it in 1951, and in an intense six-week spell at the beginning of 1952 he finished it. The book tells the story of Santiago, an old deep-sea fisherman, who had gone 84 days without catching a single fish. He is cared for and supported by a young boy called Manolo. This character is based on the young son of the owner of La Terraza named Mandito. And the old man of the story, Santiago (St. James - the patron saint of Spain) is thought to be based partly on a local fisherman called Anselmo Hernandez, and partly on Hemingway's first mate, Gregorio Fuentes.

A friend of Hemingway's, Leland Hayward, read the manuscript of the finished novella. He loved it; and he advised Hemingway to try to get it published in a national magazine like Life or Look. Ernest followed his advice, and he eventually got Life to pick up the option to publish. They decided to publish it in a single edition, with a portrait of Hemingway on the front cover.

Famed photographer Alfred Eisensstaedt was dispatched to Cuba to get some photographs of the author. It turned into a major ordeal for Eisensstaedt - the most difficult photo shoot of a celebrity that he had ever encountered. Hemingway must have been in one of his "black-ass" periods - a phase of serious depression. The photographer recalled the unpleasant experience many years later. He said that, instead of the fellow-artist and man of letters that he expected to deal with, he was having to cope with a "thoroughly disagreeable, paranoid, booze-sodden lunatic". Most of his conversation was peppered with obscenities; and Hemingway would erupt into violent rages over some minor slights - some of them real, but many imagined.

But Eisensstaedt did manage to get a few serviceable images, after he followed Hemingway on a walk through Cojimar. And the eventual portrait that was used on the magazine cover was a rather riveting, revealing image of the 52-year-old writer.

Life magazine published The Old Man and the Sea on Labour Day - September 1, 1952. The story filled twenty pages. 5,000,000 copies went out on sale; the entire run was sold out in two days! Six days later his book publisher, Scribners published a first edition hardcover release of 50,00 copies. They agreed a very generous royalty of 20% for sales beyond the first 25,000 copies. 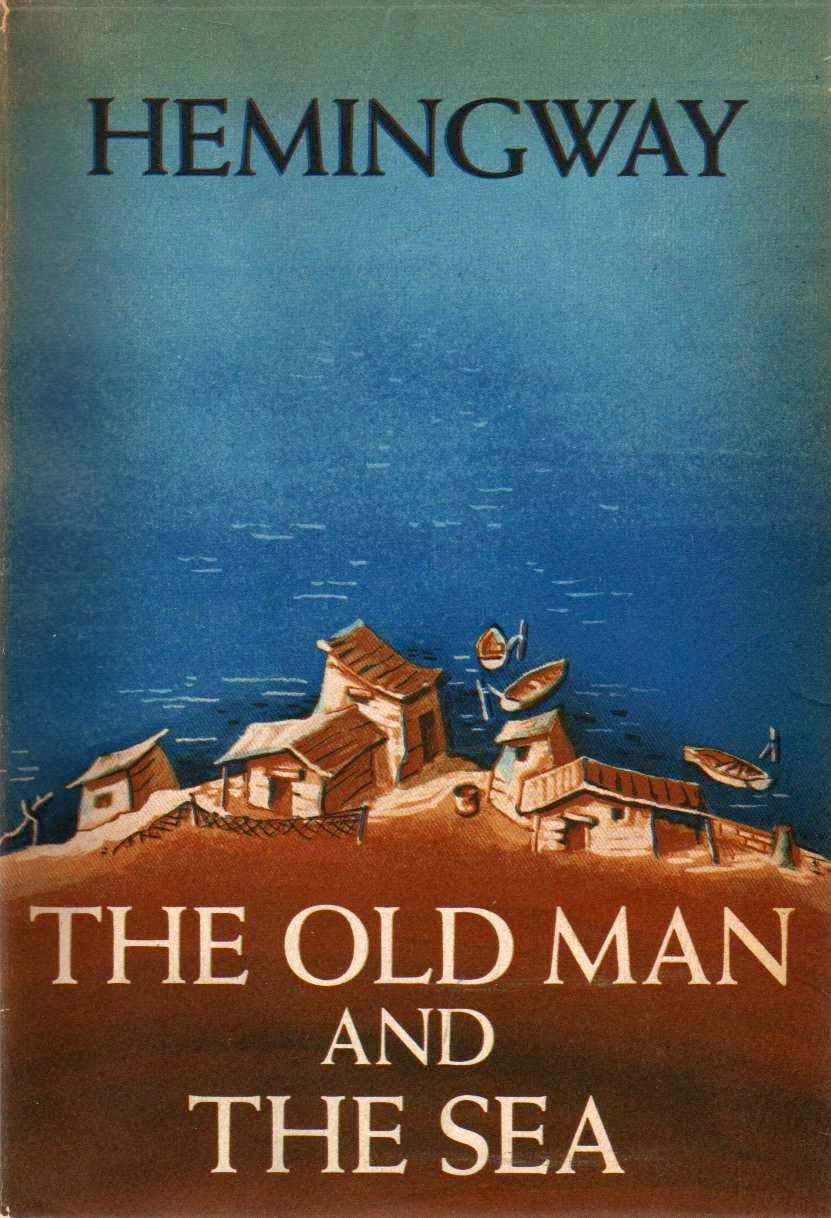 And the Book-of-the-Month Club selected it as a featured title; they published 153,000 copies. The novella spent 26 weeks on the best-sellers list. By the end of the year it had been translated into nine different European languages. In 1953 The Old Man and the Sea was awarded the Pulitzer Prize for Fiction. And the Nobel Committee cited the work as a contributing factor in their decision to award Hemingway the Nobel Prize for Literature in 1954.

On the third page of the book, the old man and the boy are sitting on "the Terrace" [La Terazza de Cojimar] and "many of the fishermen made fun of the old man and he was not angry. Others, of the old fishermen, looked at him and were sad. But they did not show it and they spoke politely about the current and the depths they had drifted their lines at and the steady good weather and of what they had seen." It was a familiar topic of discussion for Hemingway and his friends in the Cojimar tavern.

When I took a close look at the impressive collection of black-and-white photographs of Hemingway (unfortunately I don't remember the name of the photographer, but I'm trying to find it on the internet!) taken by a Cuban photographer right in Cojimar, I noticed in the background of one of them the neo-classical monument that stands next to the old Spanish fort, Torréon de Cojimar.

I don't know if there was something displayed originally in the centre of this circular, colonnaded memorial, but in 1962 - just one year after Hemingway's death by suicide in Ketchum, Idaho - a group of his Cuban friends and fellow-fishermen in Cojimar got together and collected old pieces of metal from around the village: chain links, propellers, anchors, and so on. These remnants were then fashioned into a bust of Ernest Hemingway by Cuban sculptor Fernando Boada Marten. 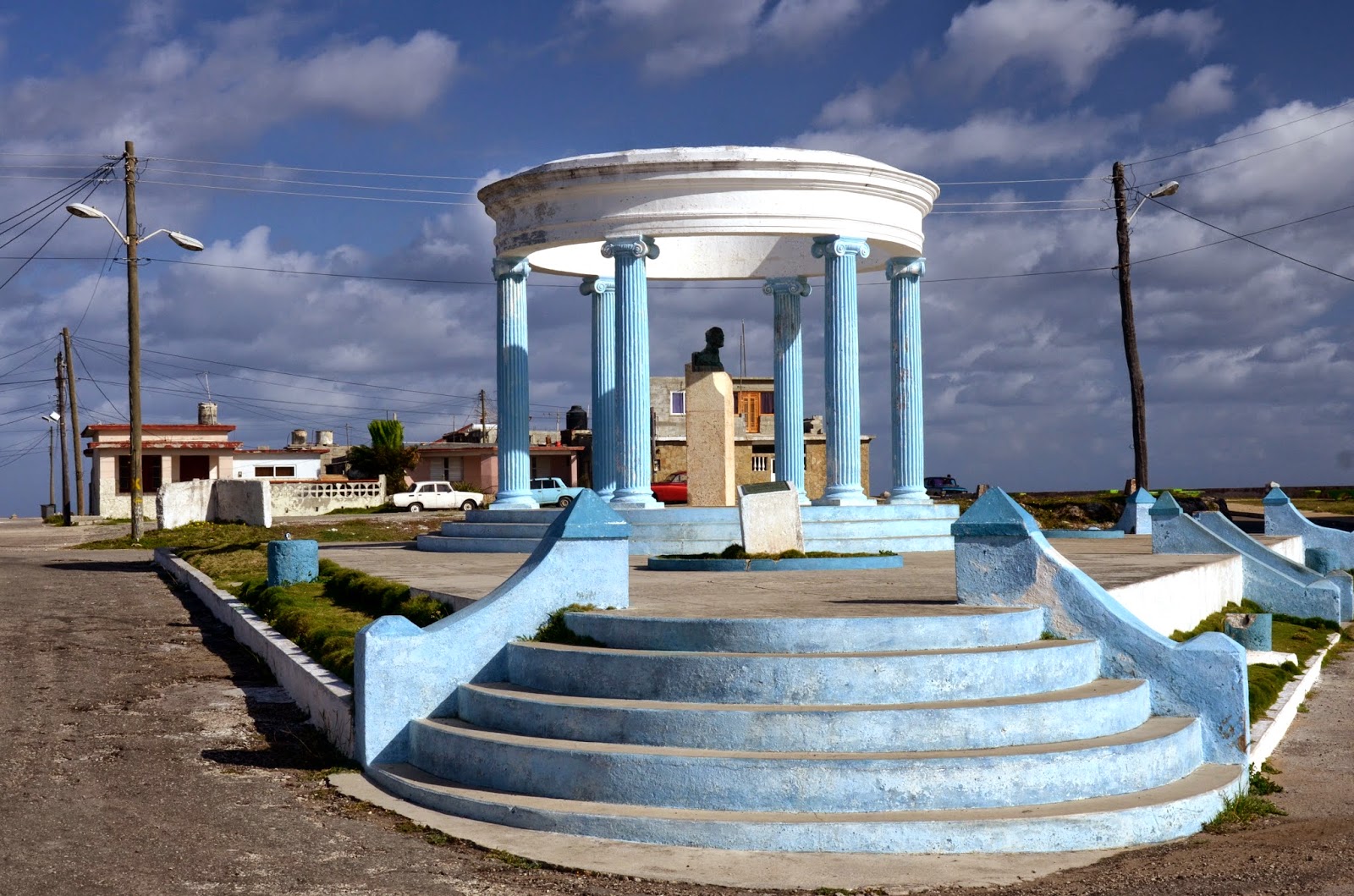 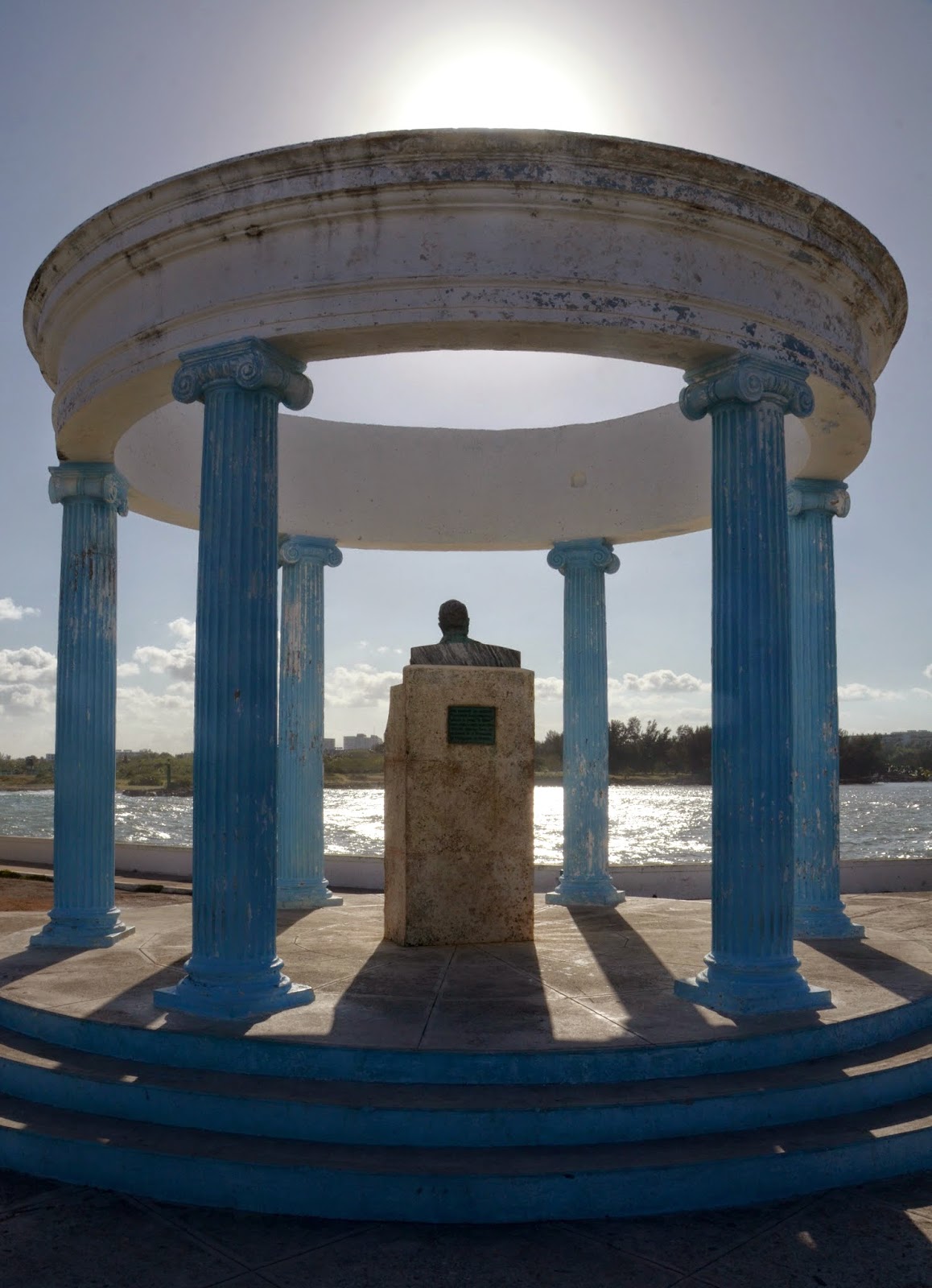 After checking out the old fort, the Hemingway Monument, and la Terraza de Cojimar, one can finish one's stay in the village, as we did, by strolling around some of the back-streets. It's interesting to see the styles of the houses and the materials from which they are built. There are also the ubiquitous 1940s and 1950s American cars beside many of the local homes.

We enjoyed a half-hour walk - eventually working our way back to the taxi we had rented, sitting in the driveway beside La Terraza. It was interesting visiting this former Hemingway haunt. I recommend it to anyone keen to follow the great man's footsteps in Cuba. It's out of the way of the usual spots in Havana, but much quieter, therefore, and more comfortable in the gentle afternoon breeze. 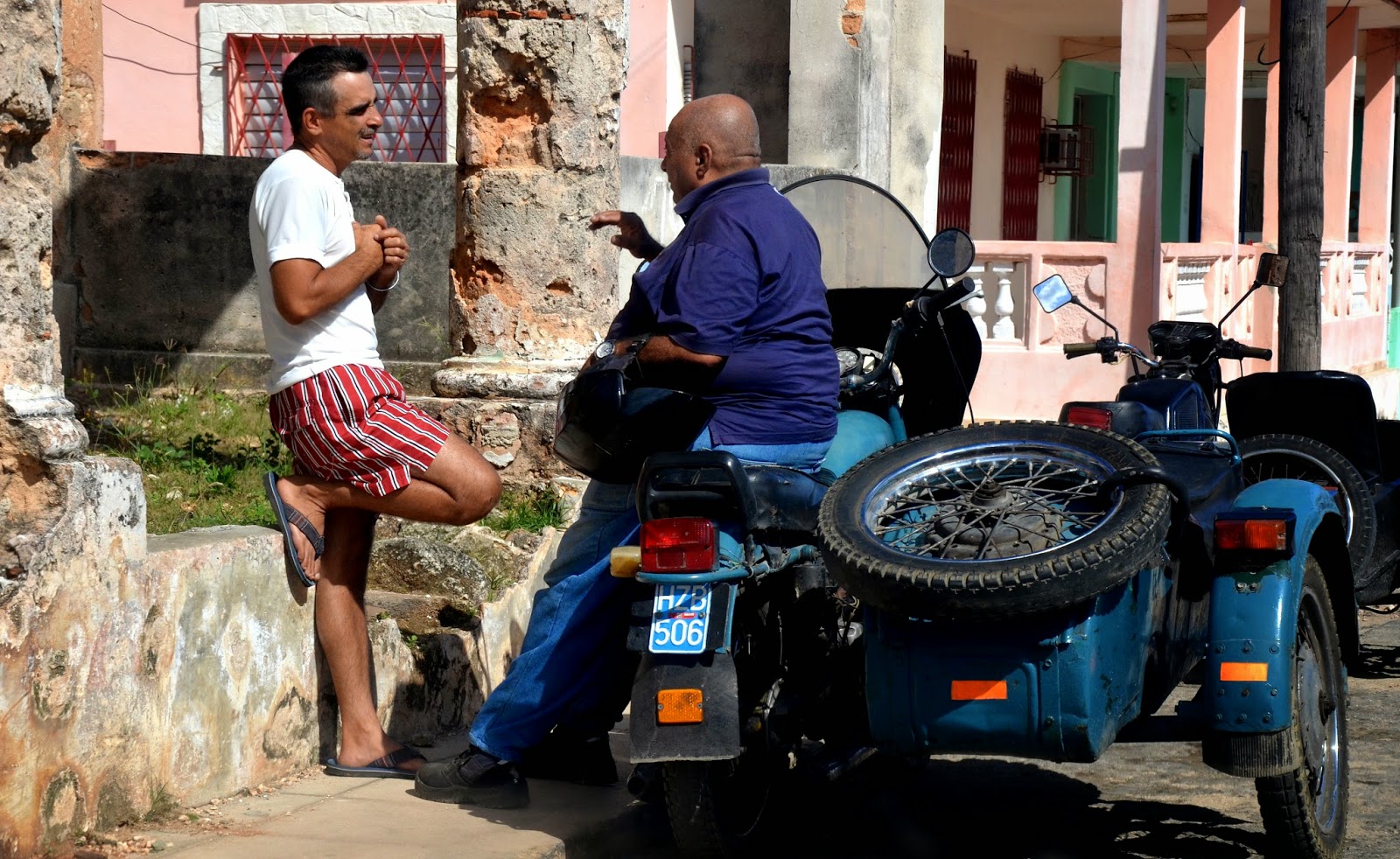 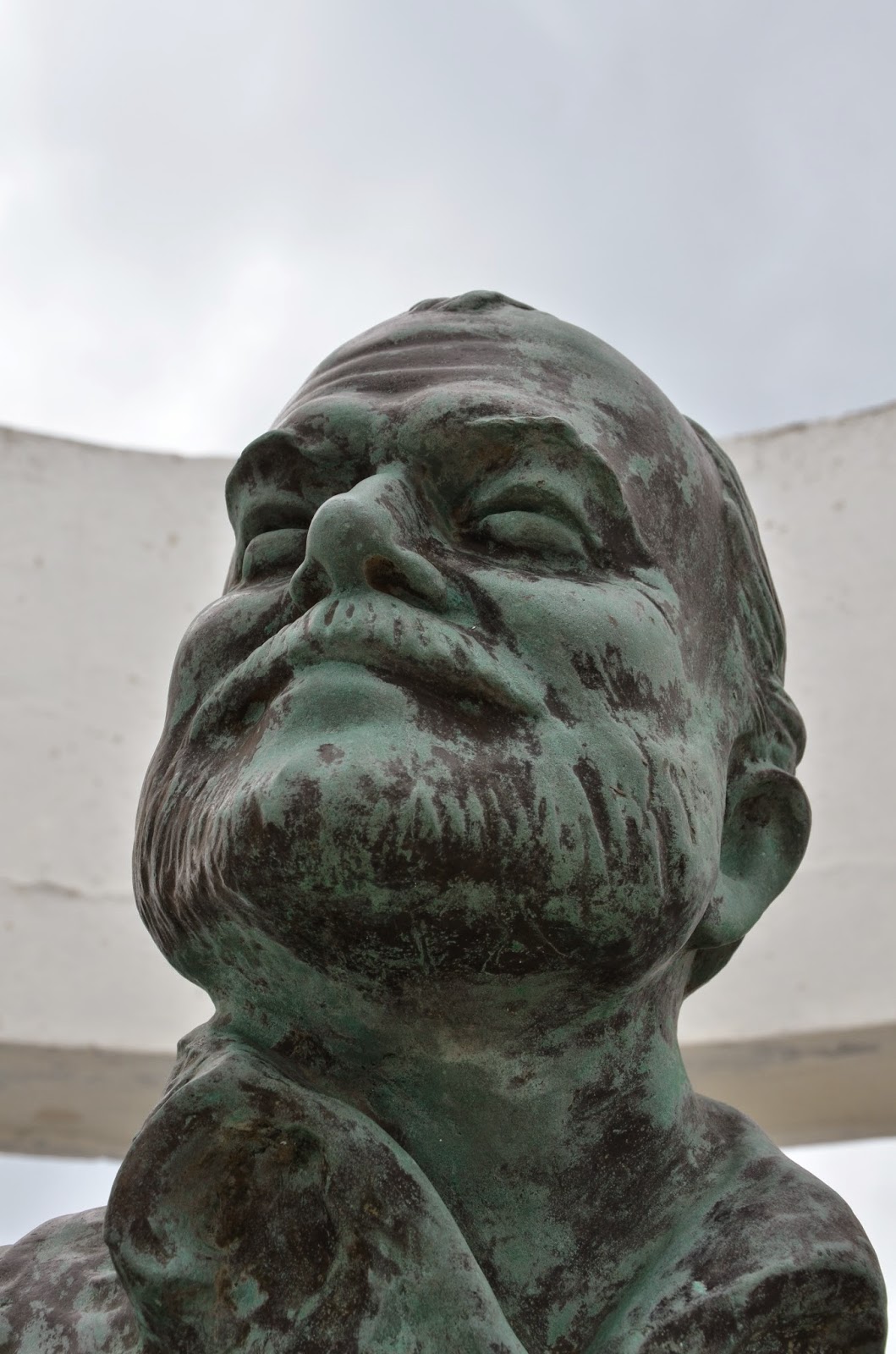 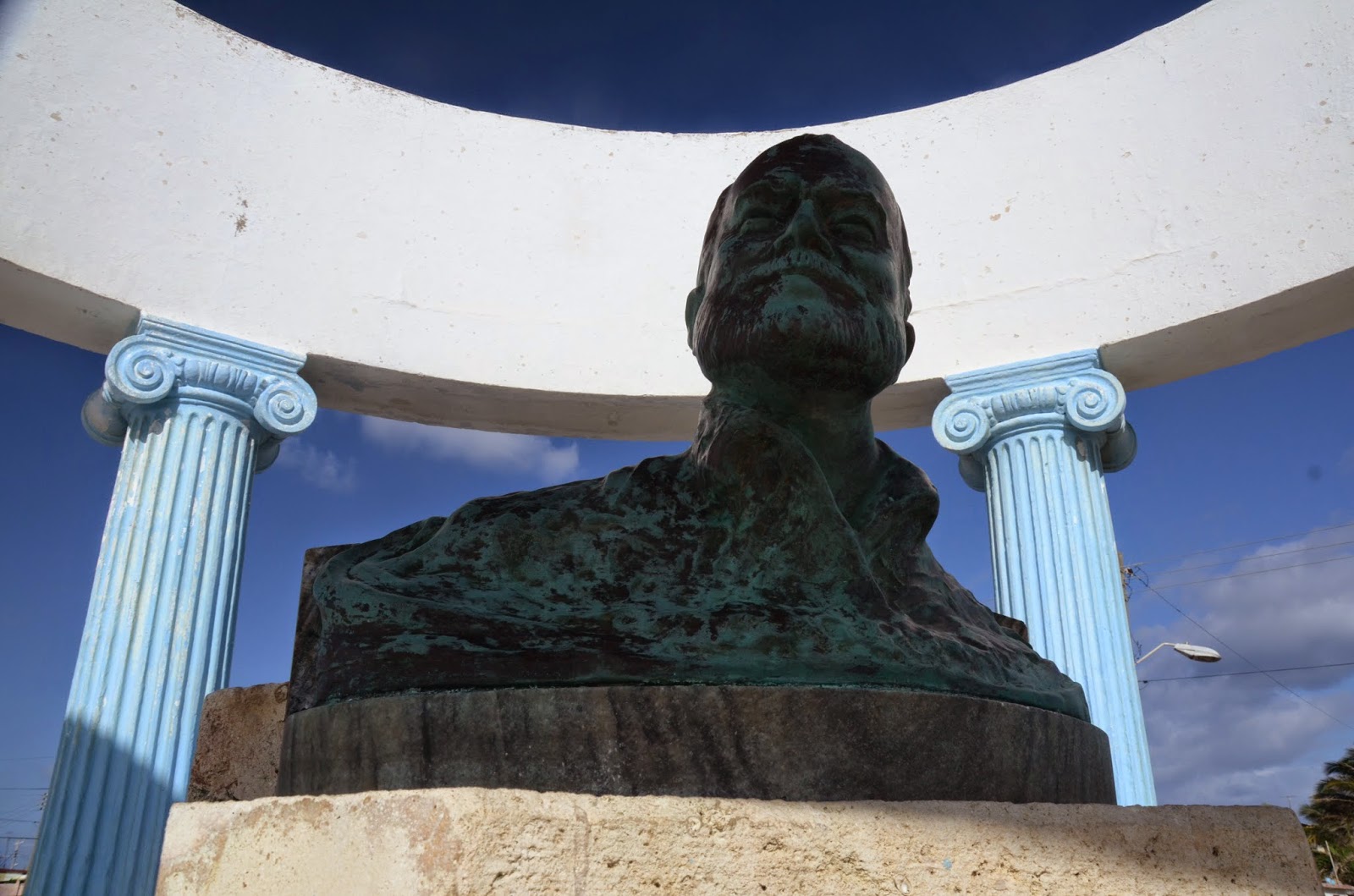