CD Review: "Kisses on the Bottom" from Paul McCartney 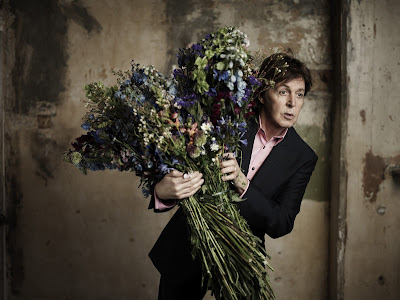 Kisses on the Bottom is Paul McCartney’s sixteenth studio album. On this one, he has turned his attention to some of the pop standards of the 1920s to 1950s – songs from the “great American songbook”.  Paul says that for years he’s wanted “to do some of the old songs that my parents’ generation used to sing at New Year”.  Of course, Ringo Starr did just that - way back in 1970, just as The Beatles were breaking up - with his first solo album, Sentimental Journey, produced and orchestrated by George Martin. Paul does one of the same songs from that album – “Bye Bye Blackbird”, as a tribute, I think, to Ringo’s pioneering effort. He also does “The Inch Worm” – which recalls the first Mary Hopkin album, Post Card (she of “Those Were the Days” fame). Mary did the song on that first album, produced by McCartney (1969).

There are other familiar choices on Pauls’ album: Irving Berlin’s “Always”, for example, Harold Arlen and Johnny Mercer’s “Ac-Cent-Tchu-Ate The Positive”, Billy Hill’s “The Glory of Love”, and Harold Arlen, ‘Yip’ Harburg, and Billy Rose’s “Paper Moon”. But McCartney is smart to include less well-known material: Frank Loesser’s “More I Cannot Wish You” from Guys and Dolls, for example, and Johnny Burke and Harold Spina’s “My Very Good Friend the Milkman”. He used the same strategy with his excellent 1999 album of rock ‘n’ roll covers, Run Devil Run – which featured the familiar: “All Shook Up”, “She Said Yeah”, and “Brown-Eyed Handsome Man”; and the obscure – “Movie Magg” (Carl Perkins) and “Coquette” (Fats Domino). Kisses on the Bottom, like Run Devil Run also has some original stuff: “My Valentine” – which sounds like a 40s standard itself – and “Only Our Hearts”, which closes out the album

With Kisses on the Bottom [the cheeky title, by the way, comes from the opening track, "I'm Gonna Sit Right Down and Write Myself a Letter", and refers to appending a letter with kisses (x x x) at the bottom - it's not an invitation from Macca to kiss ... you know!] McCartney was wise to surround himself with experienced people who know this stuff. The producer is Tommy LiPuma, who has worked with the likes of Miles Davis, Barbara Streisand, and George Benson. LiPuma has pulled together some superlative talent for this project: Diana Krall leads a crack rhythm section, playing piano and doing the small-combo arrangements; Eric Clapton plays acoustic and electric guitar on several tracks; Stevie Wonder does a fantastic chromatic harmonica solo on “Only Our Hearts”; Johnny Mandel - a composer and arranger who has worked with musicians like Sinatra, Count Basie and Peggy Lee - arranges and conducts an orchestra in L.A. on a few tracks; and Alan Broadbent arranges and conducts the London Symphony Orchestra on five tracks at Abbey Road Studios. When you are someone with the stature of Paul McCartney, you can attract the best to come in and help.

And McCartney does need help – because, let’s face it, he really is out of his element here. He may have been the Beatle with the most interest in pop and show tunes (“A Taste of Honey” and “Till There Was You”, for example), but that doesn’t guarantee success in negotiating an album full of these sorts of songs. And, given the competent and authentic backing he receives, it all comes down to the vocals. Does Paul deliver convincing performances? Well, on a few. When he relaxes and sings in a familiar way, he hits it. “Ac-Cent-Tchu-Ate the Positive’, for example, works well – probably because it’s a light, upbeat lyric. “Get Yourself Another Fool” swings nicely, too, with tasty lead guitar work from Eric Clapton. And Paul’s own ballad, “My Valentine”, not surprisingly, is delivered with confidence. But on most of the other vocals, he sounds tentative and unconvincing. He adopts a faux intimacy on many of the ballads by getting up close to the microphone and singing in a hushed, unhurried style. But he doesn’t have enough command of his vocals to perform these songs with the skill and finesse they deserve. When he’s singing “Paper Moon”, for example, I’m thinking, ‘OK, but he’s no Nat King Cole’; and his version of “We Three” is nice, but it just makes me want to listen to Sinatra’s take on the song instead. And so it goes for most of the album – it’s competent, but there’s nothing that thrills you.

The singers who do this material best - Louis Armstrong, Billie Holiday, Fred Astaire, and Ella Fitzgerald - know how to sing a line. Paul is guilty of chopping up a lyric - focusing on words and phrases and taking too many breaths; he hasn’t learned proper breath-control, so he cannot sing the entire arc of a lyric-line and give it its full meaning. Frank Sinatra was the master at this. He got inside a lyric, understood it, and delivered it with a subtle power. McCartney is also guilty of some sloppy diction - "More I cannot wish ya", for example - which is uncharacteristic of this style of singing. 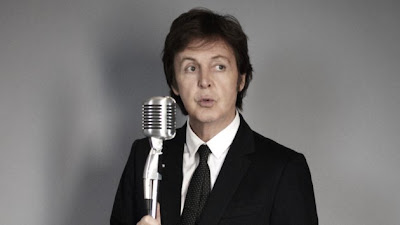 But I’m not going to fault McCartney for trying (then again, this rock/pop-figure-does-the-standards shtick has been done to death - think Linda Ronstadt, Carly Simon, Rod Stewart, for example). After all, he’s likely to introduce this genre to a lot of the uninitiated - which can only be a good thing. It does seem awfully late in the game, though. Harry Nilsson was probably the first of his generation to go this route, with his 1973 album A Little Touch of Schmilsson in the Night, working with arranger Gordon Jenkins, who had provided his typically-lush string arrangements for half-a-dozen Sinatra albums of the 50s and 60s. Nilsson had the vocal ability to cope with the material, but – despite his off-the-wall personality – he failed to bring any humour or appropriate irony to the project. Well-meaning, but ultimately dull. And that’s what this is. There’s no denying that there’s a lot of good music here. It’s worth a listen, to hear how Macca copes with the repertoire; but I doubt I’ll come back to it again. I’ll stick to Frank and Ella and Billie.

Email ThisBlogThis!Share to TwitterShare to FacebookShare to Pinterest
Labels: Kisses on the Bottom, Paul McCartney