Neil Young doing an album of traditional American folk songs? Not too surprising, eh? Some nice, laid-back arrangements, presumably, dominated by acoustic guitars – similar to the easy-going vibe of Comes a Time (1978)?
Well, that’s not what this is at all. This is Neil Young and Crazy Horse. This is garage-band, rough-at-the-edges, crunchy rock, reminiscent of Ragged Glory (1990) - what Rolling Stone magazine refers to as “one of those fraternal freak-guitar slopfests”. I don’t know, is that meant as a compliment?

Traditions - yes,  Americana is an album of traditional folk, but it's done in the traditional Neil Young & Crazy Horse style: rough and loose, nearly all recorded live off the floor without overdubs – the way they like it. And the way I like it too.

There’s 57 minutes of music, here – 11 tracks with fairly tight arrangements - for these guys, anyway. They only really stretch out on “Tom Dula” (their version of “Tom Dooley”), which clocks in at 8:13. The sequencing of the tracks is artful. The less-interesting-because-overly-familiar songs (Stephen Foster’s “Oh Susannah”, for example, or “Clementine”) come early. But then the album presents some more intriguing choices and moves through several changes of pace towards a barn-storming finish.

Americana has been getting very mixed reviews, since its release just over two weeks ago. I reckon some critics have judged it too quickly – jaded by some of its content and alienated, perhaps, by its apparently slap-dash approach and incongruous (for some listeners) arrangements. Some seem to detect an arch and cynical attitude to some of the material, but I don’t hear that at all.

I don’t know about you, but I find I usually stick with my initial impression of a new album. But I will listen to it at least half-a-dozen times before attempting to write about it - even more times, if I find my response is particularly ambivalent. Americana begins with a very ragged intro: Neil picking out a few notes on guitar, then shifting around with some tentative chords – before Ralph Molina starts banging on the drums, and they slide into their groove after half a minute. Immediately it sounds like a jam session – and that ambience is emphasised at the end of the track when the band erupts into laughter off-mic and you hear Neil exclaim to the band: “It’s funky … it’s good … it gets into a good groove.” Indeed. My initial impression? Oh, yeah. Nice!

It may be ragged and hard, but it sounds good. Neil Young has always been concerned about the audio quality of his albums; and he has been a long-term critic of digital sound because of its limited frequency response – especially in the early days of CDs. No surprise, then, to see that this album is an A-A-D production: it was recorded on an Audio Tube console to 2” 8-track analogue tape; then mixed to ½” 2-track analogue tape; before finally being transferred to digital. Yes, it may be ragged, but it sounds good – especially the tone on Neil’s electric guitar!

Americana was produced by Neil Young and John Hanlon. Crazy Horse features Ralph Molina on drums and vocals, Billy Talbot on bass and vocals, and Frank “Poncho” Sampedro on guitar, organ and vocals. Neil, of course, plays lead guitar and sings – with the rest of the band providing a kind of “Greek chorus” style of backing vocals. One of the secrets to the appeal of this long-standing relationship between Neil and Crazy Horse (which goes all the way back to 1968, and was first featured – memorably - on disc with Neil’s second album Everybody Knows This Nowhere in 1969) is the distinctive mixture of hard and smooth in their sound. And that shows here: they thrash away as a hard-rock band, but the vocal backing is sweet and harmonious - if a little ragged. But it's honest and real, instead of slick and air-brushed with auto-tuner.

What we have here, primarily, is a set of campfire songs done in the style of heavy, garage-band rock. There’s Foster’s “Oh Susannah”, the traditional folk pieces “Clementine”, “Tom Dula”,  “Gallow’s Pole”, “Travel On”, “She’ll Be Coming Round the Mountain” (called “Jesus’ Chariot” here), and Woody Guthrie’s “This Land Is Your Land”. And, despite the grunge-styled approach, the campfire mood is retained, and I find myself bursting out into song throughout.

Neil Young’s detailed liner notes for each song reveal an interesting aesthetic throughout. Although nearly all the material is traditional folk, they deliberately choose arrangements that pay tribute to pop and folk-rock versions of the songs from the fifties and sixties. “Gallows Pole”, for example, is based on the Odetta version from the ‘60s. And the group’s rendition of “Travel On” is based on a Paul Clayton arrangement - which is itself based on a 1958 version done by Billy Grammer. Reading the notes, then, heightens the sense of the historical continuity the band brings to these old songs.

And there are some surprises. They do a very sloppy version of the doo-wop classic “Get a Job” – using the original arrangement by The Silhouettes. Neil claims this is a folk song – because of its proletarian subject matter. Hmm …  And one of the highlights of the disc, for me, is a bluesy rendition of “High Flyin’ Bird”, a song written by Billy Edd Wheeler for The Company. Neil and band copy the arrangement recorded by The Squires in 1964, which had Neil’s colleague Stephen Stills on lead vocals. This is a moving song:
“There’s a high flyin’ bird way up in the sky;
And I wonder if she looks down as she flies on by,
Just floating so free and easy in the sky;
But look at me here, I’m just rooted like a tree here,
I got them sit down, can’t fly, oh Lord, I’m gonna die blues.”

Oh, and if you are looking for a folky acoustic guitar piece - there is one that Neil does: it’s a lovely version of “Wayfarin’ Stranger”, based on Burl Ives’ 1944 recording.

But the two epics here are the Woody Guthrie piece and a clever version of “God Save the Queen” – no, not The Sex Pistols classic, but the British national anthem. For Guthrie’s “This Land is Your Land”, Neil adds a choir and brings in Stephen Stills and wife Pegi to help with the vocals. A real campfire feel here. Good to see, too, that Young goes back to the original Guthrie lyrics. Most people are probably only familiar with the adapted lyrics of Peter, Paul and Mary – where the song became a kind of paen to the beauty of the America landscape. Guthrie’s song is political protest – it’s actually about the tyranny of private property – how it separates the people from land that is rightfully theirs to enjoy.

“As I went walking, I saw a sign there,
And on the sign it said ‘No Trespassing’,
But on the other side, it didn’t say nothing -
That side was made for you and me.”

The album closes with an intriguing version of “God Save The Queen” – not designed, as some might think, or hope, as a tribute to Elizabeth II’s diamond jubilee! No, it’s a folklorist’s approach – arranged as  a clever medley. The track starts with the first two verses of the British national anthem; and then morphs seamlessly into the American song “My Country ‘Tis of Thee”, which shares the same tune. The transition, Neil writes, is “in recognition of the War of Independence and America’s transition to freedom.” An interesting way to finish the album – for a former Commonwealth citizen, and now long-term resident of the United States.

So, this is probably the most interesting album that Neil Young and Crazy Horse have put together since 1996’s  Broken Arrow. And it’s not just grunge-rock renditions of old folk songs. There’s a lot more going on than that. And a few real gems. If you dig the Neil Young with Crazy Horse brand, you’re likely to enjoy their latest album. I did – but as a long-term folky and Neil Young fan, that’s really no surprise, is it? 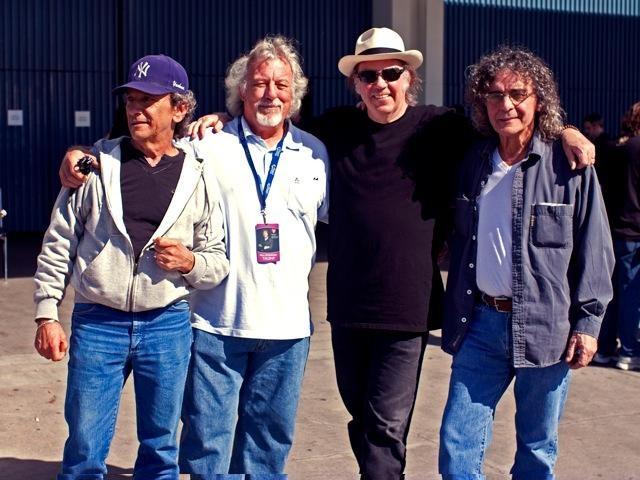