Photo Essay: Twinings on The Strand

On July 10 my good friend Tony and I did an epic, Dickens-related hike through Central London, beginning at Charing Cross Station and ending at the Charles Dickens Primary School in Southwark (south of the Thames).


Much of our walk took us to places on, or near, Fleet Street and The Strand. We were looking for residences and institutions tied in some way to the life and career of the great English novelist Charles Dickens. But when we got to 216, The Strand, I suggested we step inside, rest our aching feet for a while and enjoy a cuppa - because this is the home of Twinings Tea!


On this very spot in 1706 Thomas Twining opened the first tea room in London. The shop has been here ever since - which makes it the oldest shop in the City of Westminster. And the Twinings family still owns the brand and runs the shop.
﻿﻿
﻿﻿
As a fan of loose tea who lives in Canada, I know the Twinings brand well. It is the only loose tea generally available in Canadian supermarkets. They sell about half-a-dozen varieties in differently-coloured 100-gram tins. But for some reason, they don’t sell loose Darjeeling tea in the Canadian market. I had to get inside to replenish my own personal stock. 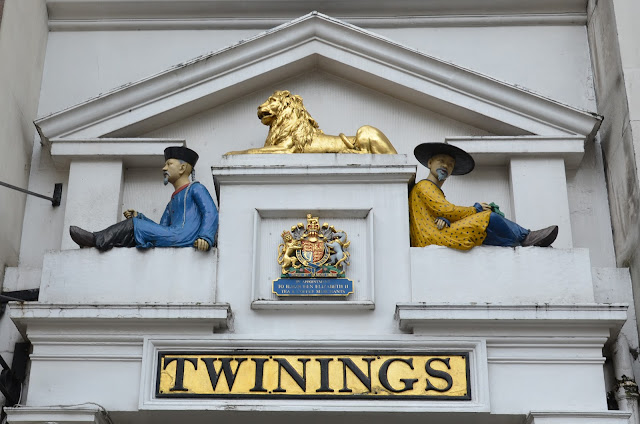 As you prepare to cross the threshold into 216, The Strand, you can’t help but notice the dramatic figures perched above the doorway – and the distinctive Twinings’ logo, created in 1787, and the oldest commercial logo in continuous use. Those figures, of course, conjure up thoughts and images of European exploration in China and the trade that would be opened up with the East.

The term tea refers both to the plant itself (camellia sinensis) and the beverage that is obtained by infusing its prepared leaves in boiling water. The tea plant is an evergreen and grows primarily in Asia; it usually requires a tropical or sub-tropical climate in order to thrive. There are two main types of tea. The China plant (camellia sinensis sinensis) yields green tea – it is the source of most Chinese, Formosan and Japanese teas. The Assam plant (camellia sinensis assamica) yields black tea – it’s the source of most Indian and other teas. The tea plant thrived originally in that area of Asia bordering north-east India, northern Burma, and south-west China. The drinking of tea seems to have begun in China. It was first imported to Europe by the Portuguese in the sixteenth century.

﻿
﻿
Twinings became first a purveyor of quality teas, and then they started developing their own blends. They claim to be the first company to have blended Earl Grey (although Jacksons of Piccadilly – now owned by Twinings! - also claim that historical credit). Their shop on The Strand is a long, narrow room. The walls on either side are full of wooden shelves stuffed with an impressive array of green and black teas. Some are everyday, cheap varieties; others are very expensive, limited offerings. It's about $3.00 per 100-gram packet for the cheapest loose tea. But you might pay $30.00 for the same amount of a more exotic variety.

﻿
﻿
Not sure which tea to buy? No matter; you can kill two birds with one stone - refresh yourself with a nice cuppa, and try a new blend. There's a fairly wide assortment to choose from at the back of the shop. It only takes a few minutes to boil some water, brew some tea, and sit for a while to talk about tea and admire the historical artifacts on display.
﻿﻿﻿﻿﻿﻿﻿
﻿﻿﻿
﻿

﻿Here’s Tony enjoying a cup of tea in Twinings. He’s been in this shop before. Back in December of 2011 he wrote a blog about a particular visit he made, following in the footsteps of Jane Austen – one of his favourite Victorian novelists. Jane Austen used to shop at Twinings. Here’s a link to his blog:

A couple more tea-related things for you to check out: 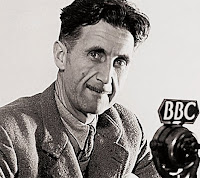 Here’s a link to an amusing essay written by George Orwell in January, 1946 – “A Nice Cup of Tea”. 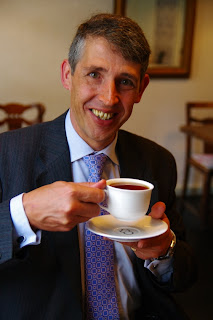 Here’s a link to a YouTube video in which a member of the Twinings group (Stephen Twining) explains in detail how to brew the perfect cup of tea.

[Thanks to my pal, Tony Grant, for a fascinating hike through central London. Cheers!]
Posted by Clive Baugh at 19:24