CD Review: Van Morrison's "Born To Sing: No Plan B" 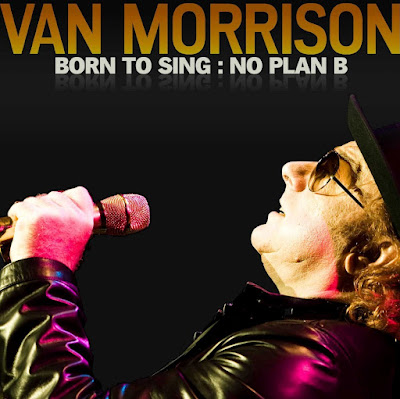 Sometimes you get so over-exposed to an artist that your appreciation gets burned-out. When I first got together with my wife, Barbara, and we used to spar over what LP to put on the turntable, the choice we invariably made was Van Morrison. He was one musician we both really loved. We played those classic early 70s LPs of his all the time. In a span of just four years (1968-1972) he had released a string of five brilliant albums: Astral Weeks, Moondance, His Band and the Street Choir, Tupelo Honey, and Saint Dominic’s Preview – most of which he produced, or co-produced. An incredible run. Then his marriage fell apart, and he seemed to lose his way. There was even an unprecedented three-year gap between Veedon Fleece and A Period of Transition in the mid-70s. But he got back into the groove with Wavelength in 1978. And since then it’s been – more or less – one  album per year from him.
But, as I say, I got burned-out with him. He started to sound jaded and repetitive – seeming to go through the motions just to honour his recording contract. The 90s, particularly, saw an extended dip in form. And the Mr. Grumpy persona he cultivated really began to grate – each album featuring a song or two of him complaining about being ripped off and exploited. But I kept up with what he was doing, buying every release – couldn’t have a hole in the Morrison-section of my record library, after all! Didn’t listen to the new ones, however, as much as I used to.
It’s been the longest hiatus between albums, now, for Van: his last studio album, Keep It Simple came out in 2008 – that’s a four-year wait. So, as I slipped my copy of the new Van Morrison CD, Born To Sing, into my player, I had a sense of hopeful anticipation – as usual – but also a feeling that it could be more of the same – a competent, middling effort. Wrong! Within a couple of tracks I knew this was a really good one. There was Van singing like he meant it and the music – arrangements, production, and playing – sounded great. 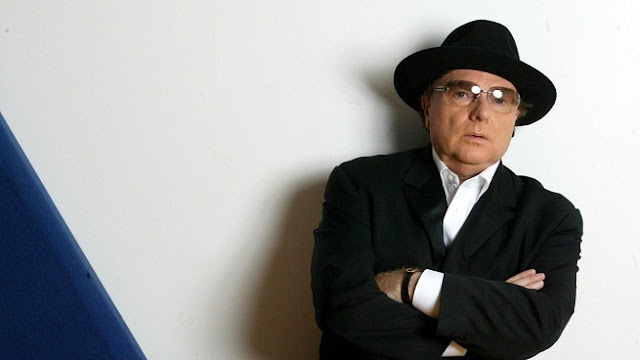 Born To Sing: No Plan B is Van Morrison’s thirty-fifth studio album release.
It was recorded back on his home-turf of East Belfast, in Northern Ireland. Van, as usual, produced the album – an hour’s worth of jazzy R&B and blues – and it was released on the jazz label Blue Note back on October 2. Enda Walsh did the recording and mixing. Morrison wrote all the songs and plays piano, guitar and alto sax. With him on all the tracks is a crack, jazz-orientated sextet: Jeff Lardner on drums; Paul Moore on bass; Dave Keary on guitar; Paul Moran on Hammond B3 organ, piano, and trumpet; Alistair White on trombone; and Chris White on tenor sax and clarinet. It’s a live-from-the-floor recording – the way Morrison always produces his albums, but there is minimal overdubbing, when some of the musicians double-up on instruments.
The music on this album is centred in R&B and Blues – but the arrangements give it a prominent jazz inflection. There is lots of improvisation – everyone (except for drums) gets the opportunity to solo. Individual songs feature two or three different soloists. Some of the improvising seems spontaneous – in the middle of “Retreat and View”, for example, at the end of a verse, Van calls out, “Who’s got it?” and Alistair White jumps right in with a trombone solo. The band really swings and – regardless of the song writing and singing – the music hits an easy groove throughout. 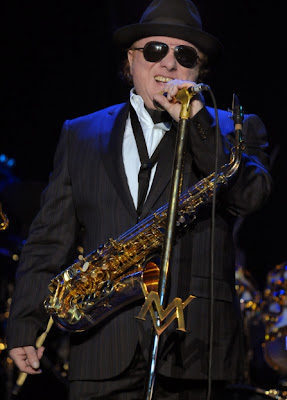 Of course, jazz is not a new thing for Van Morrison. His very first album was a strange – and wonderful – mix of jazz accompaniment (a band of top-notch jazz session-men brought together by producer Lewis Merenstein) added to folk, blues and R&B forms. He later worked quite extensively (on thirteen different albums) with jazz and funk musician Pee Wee Ellis. He’s also collaborated a lot with Georgie Fame – a British musician coming out of the R&B/jazz scene of the 60s: they share a common interest in doing R&B with a jazz feel. He was also heavily influenced by jazz composer and song writer Mose Allison. All of these threads came together on the 1996 CD called Tell Me Something, which features songs by Mose Allison performed by Van, Georgie Fame, Ben Sidran and Allison himself. And the horn arrangements were done by Pee Wee Ellis!

So what's with the song title for Track 5 ("Close Enough to Jazz"), then; is that meant as some sort of self-deprecating irony about this album? Well ... no. The track is actually a remake of an intrumental piece - with the same title - that Morrison did for a previous CD, Too Long In Exile (1993). It probably was meant ironically back then, but now it's meaning should not be misconstrued - there's there's no need for apologia:
Close enough for jazz;
Is it Persil is it Daz?
Well it doesn't really matter,
When it's better on the inside -
And it's close enough for jazz.
Jazz it is – not the “phoney, pseudo jazz” Van complains about in his acerbic lyrics for the blues piece “Goin’ Down to Monte Carlo”.
There are two main themes to Morrison’s song writing here: his concern for the effect of materialism and greed on modern life; and his personal need to escape from the pressure and demands of a public career. The former theme is established right off the top – early in the first track he sings: “Money doesn’t make you fulfilled; money’s just to pay the bills.” But it’s not something you can run from. It’s a reality you need to face and grapple with. You need to “know the score” he points out in “End of the Rainbow”.
No gravy train that stops at your station;

Every penny has got to be earned;
Everyone now has got to be at the coalface;
Taking coals to Newcastle, you’re going to get burned.
He moves from the personal to the political – unusual for him – in the final track, “Educating Archie”, and adopts a more declamatory tone:
You’re a slave to the capitalist system,
Which is ruled by the global elite;
What happened to the individual?
What happened to the working-class white?
Educating Archie was a BBC radio comedy-programme that run through most of the 50s. Strangely – given that it was a radio series – it featured the ventriloquist Peter Brough and his dummy Archie Andrews! We’re all ventriloquist’s dummies, Van may be suggesting? Or perhaps the reference to the “working-class white” means the Archie in the title is Archie Bunker – a lower-class dupe in thrall to the system?
They filled his head with so much propaganda,
Entertainment on TV and all kinds of shite.
But the best piece addressing this critique of materialism is “If In Money We Trust” - the stand-out track on the whole album. The message here is not declamatory – it is interrogative. It’s incantatory, built on phrases that repeat over and over: “If in money we trust … and you bite the dust … and it’s not enough … where’s God?” The music sets a brooding mood. The piece builds to a mesmerising climax: “Where’s God?” Van sings over and over. And then the music begins to fade away as he repeats the final phrase: “You’ve got to think it through again”. We’re soon down to soft horns, bass and bongos. And finally a bass line ends it. Brilliant! 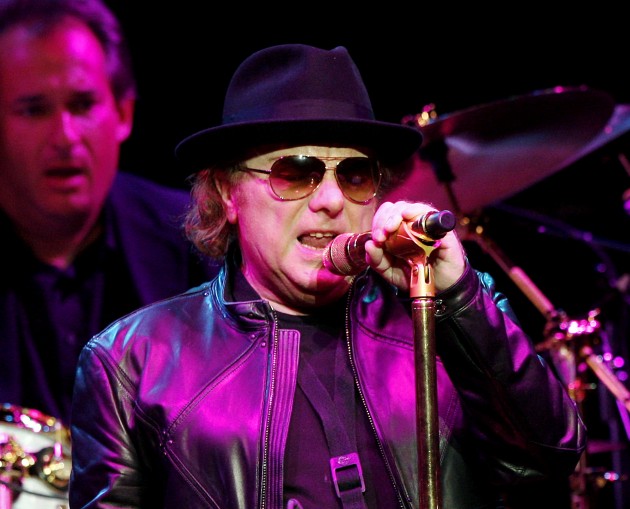 The second theme Van explores in this collection of songs is his familiar struggle to escape the annoying demands of fame and find some sort of transcendence. In the bluesy “Goin’ Down to Monte Carlo”, he sings about the need to get away from the pettiness of people around him. He’s always been a shameless name-dropper of the poets and philosophers he’s read, and here Van refers to Jean-Paul Sartre’s famous (and often misunderstood) dictum: “L’enfer, c’est les autres” (usually translated as ‘Hell is other people’).

Sartre said that hell is other people, I believe that most of them are …

Despite the complaining, Mr.Grumpy attitude of the lyrics, this is jaunty, up-beat music. Van does some nice vocal scatting at the end and does an alto sax solo. “Retreat and View” explores an idea first expressed way back on Van’s very first solo album Astral Weeks – in the jazzy track “Beside You”: “And you wander away from your hillside retreat and view.”  The new song talks about the search for renewal and transcendence:
From my retreat and view,
Got to make my own break through,
So I can see things new,
From my retreat and view.
In “Mystic of the East” he approaches the same subject from a more specific place. You might think he’s singing about India or Nepal, but to me it sounds like he’s punning on his origins – this mystic of the east is from East Belfast, born in Hyndford Street, near to Cyprus Avenue. Working on the album back in the city of his youth must have been inspirational – especially when he got out into the countryside of County Down (located in the eastern part of Northern Island):
Mystic of the East, mystic from the streets …
Mystic with no peace, back here in the east;
I was deep in the heart of Down;
Deep in the heart.
And then in “Pagan Heart” he juxtaposes his mystical, pagan feel for the natural world (“holy wood … sun is good … the moon is rising in the evening time”) with the world of the Blues:
Got to move on to the crossroads;
Got to go to the Arcadian groves …
And the incantatory lyrics are backed by a straight blues feel. Van plays a John Lee Hooker-styled electric guitar here; and Dave Keary provides slide guitar accompaniment.
So good, then, to see in this album that Van the Man is back on top form. He is fully engaged in every aspect of the production. The arrangements and playing are top-notch. The music really swings. If you’re a Van Morrison fan, this is one you shouldn’t pass up.

Email ThisBlogThis!Share to TwitterShare to FacebookShare to Pinterest
Labels: Born To Sing - No Plan B, Van Morrison