Photo Essay: The Grave of James Joyce in Zurich

I discovered the great Irish writer James Joyce in my late teens. I read first his autobiographical novel The Portrait of an Artist as a Young Man (published in 1916). This künstlerroman (a novel tracing the intellectual, religious and philosophical development of its young protagonist Stephen Dedalus) had a huge impact on me, because of its critical account of a young man's Catholic education. The shift Dedalus undergoes from religious ardour to complete rejection of the Church mirrored my own teenage development. Just as impressive as this first modernist novel of his was Joyce's earlier book of short stories, Dubliners (1914). I have re-read both of these works several times - and found more to admire in them on each occasion. And I have even managed, recently, to get all the way through Ulysses (1922), his long and difficult modernist masterpiece.

When my wife Barbara and I were in Zurich in July 2013, I made a point of visiting the grave of James Joyce. How did Joyce - all of whose work was focused obsessively on his homeland - end up dead and buried in Zurich? Well, the short answer is that he made the conscious decision in 1904 (at the age of 22) to exile himself permanently from Ireland, and to pursue the life of a writer in Continental Europe. For the next fifteen-odd years, James and his wife Nora lived in Italy (primarily Rome and Trieste from 1904-1915) and Switzerland (in Zurich from 1915-1920). In 1920 the American poet Ezra Pound invited Joyce to make a week-long visit to Paris - so that he could mingle with the burgeoning literary scene there, replete with hordes of American and British writers enjoying the artistic, bohemian lifestyle and taking advantage of the cheap cost of living. James and Nora liked the situation in the French capital and decided to settle there. They spent 20 years in Paris - finally leaving in late 1940 to escape the Nazi occupation. 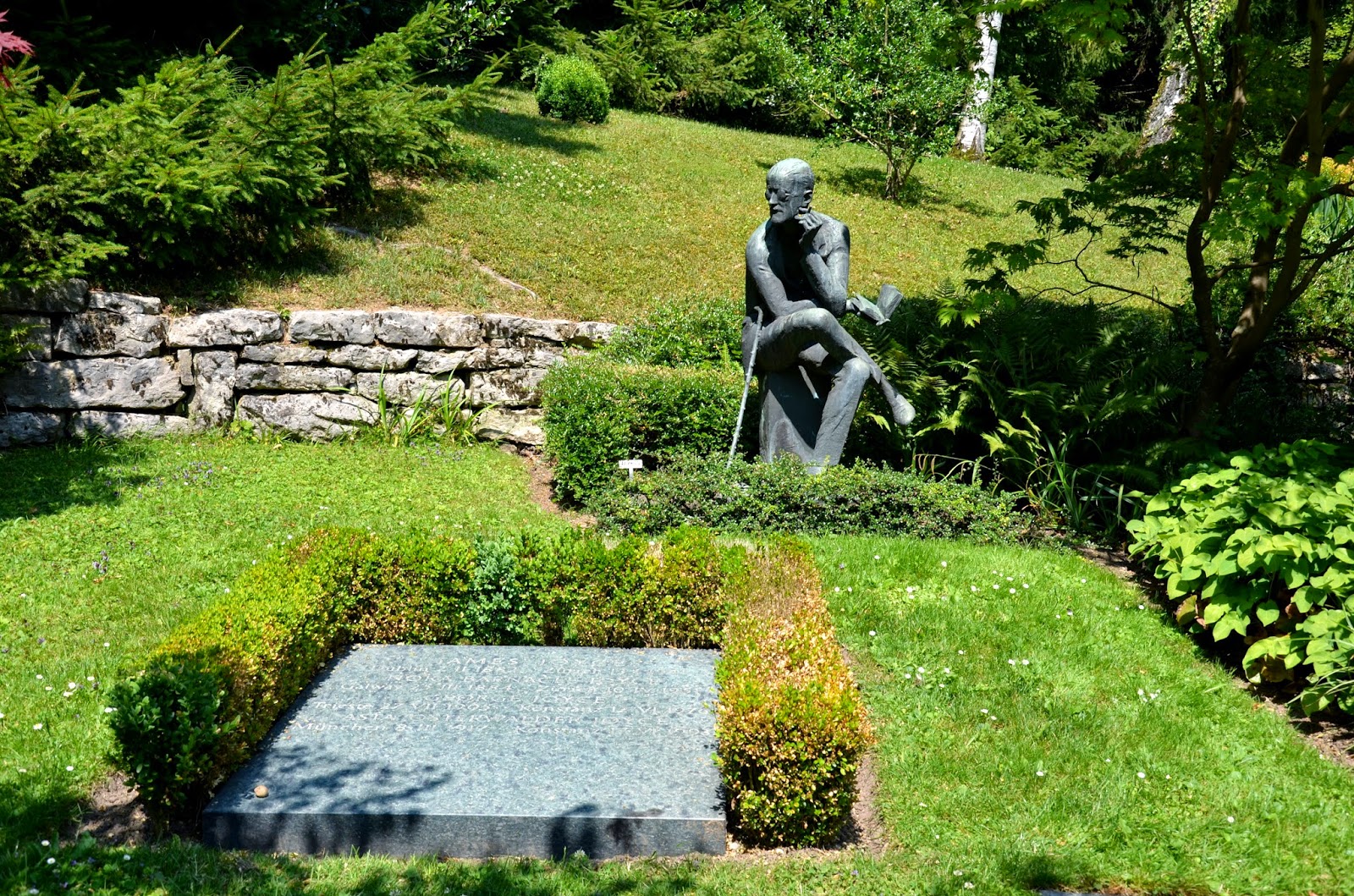 Soon after returning to Zurich (Switzerland's largest city), Joyce became seriously ill. He was eventually diagnosed as suffering from a perforated duodenal ulcer. He underwent surgery on January 11th., 1941. The procedure seemed to have been successful; he rallied briefly, but then suffered a relapse, which required several blood transfusions. He fell into a coma. He awoke at 2 a.m. on January 13th., and asked to see his wife and son George. He died 15 minutes later, as the pair were on their way to the hospital. Joyce was 58 years old.

Two days later, the body of James Joyce was taken to the Friedhof Fluntern (Fluntern Cemetery). A Catholic priest had tried to persuade Joyce's wife, Nora, to hold a funeral mass for her husband. Her reply: "Oh, I couldn't do that to him." A service was held at the cemetery in the Friedhofkapelle. Speeches were made by Lord Derwent, the British Minister to Bern, by poet Max Geilinger, on behalf of the Swiss Society of Authors, and by Professor Heinrich Straumann. The Swiss tenor Max Meili sang "Addio terra, addio ciele" ("Farewell earth; farewell sky") from Monteverdi's opera L'Orfeo. 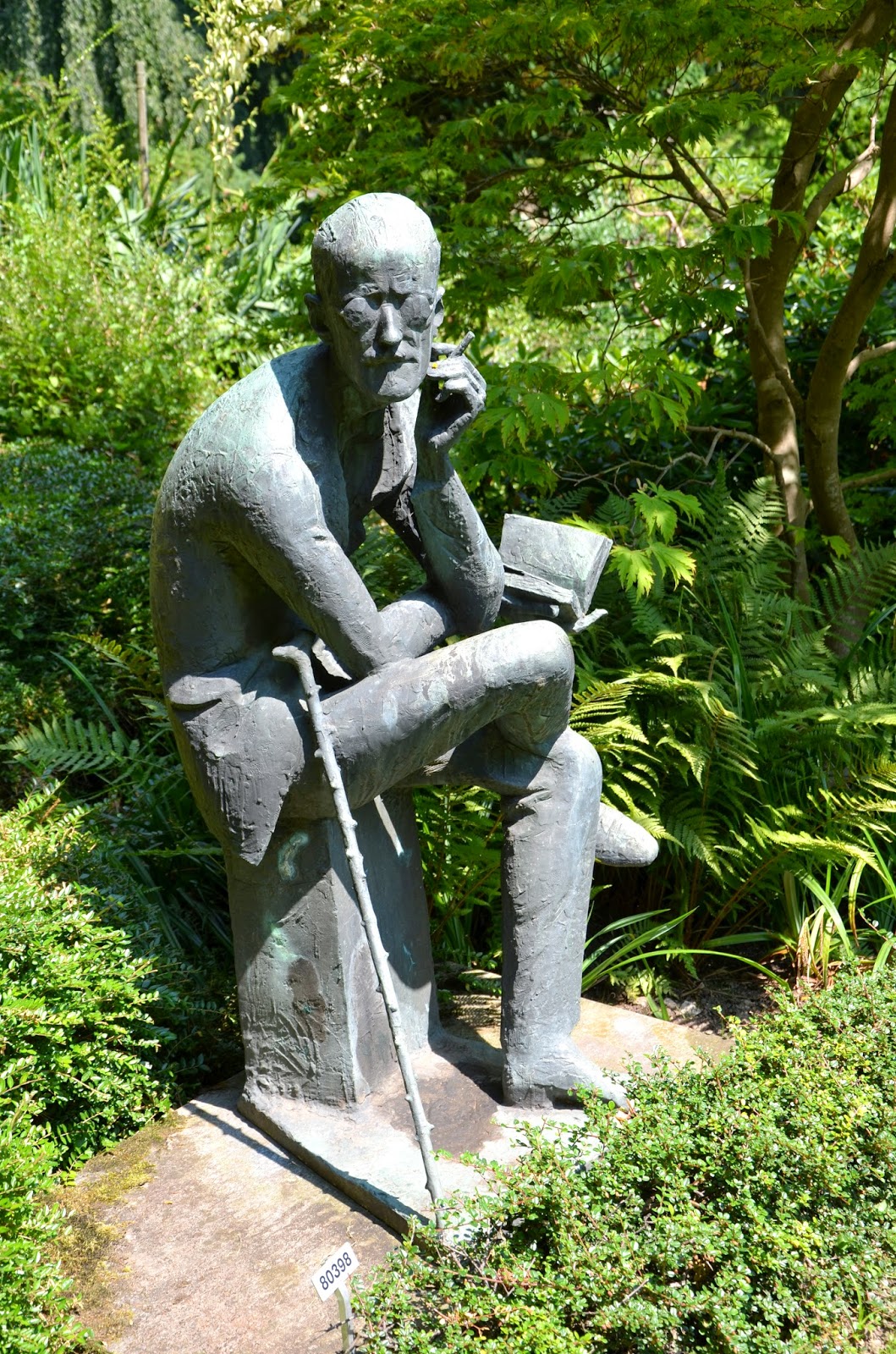 Norah Joyce attempted to have James Joyce's remains repatriated to Ireland, but the Irish government refused. Norah died in Zurich in 1951 and she was buried beside her husband. In 1966 they were moved to a permanent plot at the back of the cemetery. The body of their son George ("Georgio") joined them, following his death in 1976. A wonderful sculpture of Joyce by Milton Hebald was dedicated and placed beside their grave in 1981.

Friedhof Fluntern is on the eastern outskirts of the city, right next to the zoo. The Joyces used to visit there - James particularly liked standing at the lion cage. It was a comfort to Norah, therefore, that her husband was buried next to the zoo: "He was awfully fond of the lions," she said, "I like to think of him lying there and listening to them roar".

To get to Friedhof Fluntern is quite easy. You catch the #6 tram in the city centre and take it to the end of the line. The terminus is called the Zoo stop. The front gate to the cemetery is just 100 metres from the tram stop. The cemetery itself is a very attractive and well-maintained place. The headstones and gravesite sculptures are generally more interesting than your average home of the dead - we saw many fascinating and creative memorials there - including Milton Hebald's unique sculpture of Joyce.

There are other Joycean locations to visit in Zurich. There must be about half-a-dozen former apartments in the centre of the city that were once residences for the Joyce family: a few are near the university, and about four of them are clustered together in the oldest part of the city - on the east bank of the Limmat river.


There is also The James Joyce Foundation, founded in 1985. It is located at #9 Augustinergasse. The Foundation organizes regular readings and seminars. And its library has a very impressive collection of over 5,000 volumes - many first editions of Joyce works, and other books about the great man.

Also worth a visit is the James Joyce Pub. It can be found at #8 Pelikanstrasse. In the early 1970s, Swiss fans of Joyce raised enough money to enable them to buy the interior of Jury's Antique Bar in Dublin, which was slated for demolition. The interior was dismantled and moved to Zurich. I have to say I didn't particularly like the ambience of the James Joyce Pub - it felt more like an upscale wine bar, than a down-to-earth Irish pub. Its location in the financial and shopping district around Bahnhofstrasse doesn't help. But you might want to visit just to tick it off on your list of James Joyce sites in Zurich!

Resource: James Joyce (1959) by Richard Ellmann (revised edition published in 1982). This is probably the best - and most comprehensive - biography of James Joyce.