Old Ideas, Leonard Cohen’s latest studio album – his twelfth – was released in Canada and the U.S. on January 31. I bought it on the first day of issue and have been listening to it regularly since. I started playing it in the car, commuting to and from work. Some of the arrangements, though, are quiet and subtle - often lost in the noises and distractions of the road. So last week I put it on regular rotation in the CD player in my den. A few days ago I began listening closely to it on the headphones. Frankly, there are very few albums these days that grab my attention like this. Ten new songs here – and each one a gem.

Leonard Cohen is on an amazing roll. Back in 2005, he announced that his former manager had misappropriated about five million dollars from his personal savings. He began a long campaign to recoup the money - for himself and his family. Book of Longing – a collection of poems and drawings – was published in May, 2006. And then, in January 2008, Cohen announced he was going back out on the road with a band - for an extended World Tour. It would be his first touring for fifteen years - beginning in Fredericton, New Brunswick on May 11, 2008, and finishing two-and-a-half years later on December 11, 2010 in Las Vegas. Incredibly, Cohen did 247 shows - in North America, Europe, the Middle East, New Zealand and Australia. Every show lasted at least three hours. Amazing for a man in his mid-70s!

Cohen was writing new material during this tour – a few new songs were added to the set-list. Once the tour was over, Cohen began thinking of putting together a new album, when he met Patrick Leonard - a record producer who had worked previously with his son Adam. They began collaborating: Cohen providing the lyrics, of course, and Leonard writing the music. They worked in the back yard at Cohen’s house – he has a small recording studio set up above the garage. They used Pro Tools, a computer audio software program. Patrick Leonard programmed, produced, arranged, engineered, and performed on four tracks.

Cohen then worked with sound engineer Ed Sanders, who had a small home studio of his own. Sanders worked as producer and engineer of another four tracks, all written solely by Cohen. And then Anjani Thomas and Dino Soldo produced one track each. Finally, Cohen’s touring band, directed by Roscoe Beck, play on one track (“Darkness”). But despite the diversity of these collaborations, Cohen has maintained a unity of sound and feeling. It’s a seamless vision, an artistic whole.

This is Leonard Cohen’s first studio album since Dear Heather in 2004. He’s a notoriously slow songwriter – often working on songs for years. In a BBC Radio interview I heard recently, he joked about it. He mentioned that he had been talking about the song-writing process once with Bob Dylan. They were in Paris, meeting for coffee the day after Dylan had done a show. Dylan asked him about his song “Hallelujah”, which he'd been performing in some of his concerts:

“How long did that one take you, Lenny?”

“Oh, about two years, I guess,” he lied. It had actually taken him considerably longer.

“Oh, that one took me about fifteen minutes.” Cohen laughed.

So what are these “old ideas”, anyway? In an interview given in New York City, when Cohen was introducing the disc to the media, he said that this notion of old ideas refers to those “old, unresolved ideas, old moral questions … ideas that have been rattling around in the mind of the culture for a long time.” Of course, what he didn’t address directly, but which is also implied, is that Leonard Cohen is now 77 years old. Old being the operative word. The songs here are shot through with thoughts of death. It may not be his last album – but it might be. Here’s a man, one can’t help thinking, who is coming to grips with mortality. Pondering eternity. Writing his own eloquent epitaphs:

“I got no future; I know my days are few;
The present’s not that pleasant; Just a lot of things to do;
I thought the past would last me, but the darkness got that too.”  (“Darkness”)

But that’s not to say that the songs are morbid and depressing: there’s a lot of humour and self-deprecation. He’s serious, but he doesn’t take himself too seriously:

“I love to speak to Leonard,” the album begins – is it God speaking? – “he’s a sportsman and a shepherd” [sportsman?!]; “he’s a lazy bastard living in a suit.” How’s that for setting a tone!

He sings about love and desire - of course - even at 77, although he lets it slip in a humorous aside that he's just as happy "to leave it alone". He sings about faith and obedience, pain and depression, suffering and redemption.  Familiar ground. The lyrics are simple and direst - no elaborate metaphors, or poetic pretensions. And he hits some real zingers:

"Dreamed about you baby, you were wearing half your dress;
I know you have to hate me, but could you hate me less?" ("Anyhow")

Some of the songs are hymnic in style and attitude. Biblical language and religious images abound (mostly Christian, curiously – but that’s typical for Cohen, despite being a Zen-practising observant Jew!).


Musically, the album is wonderful. It’s a major improvement over his last album, Dear Heather (2004), which sounded under-produced – and dominated by computer-generated synth keyboards. Many of the songs here may have started in a similar fashion, but the keyboards are often mixed way back. There are a lot of interesting acoustic sounds in the arrangements: acoustic guitar - which Cohen plays on three tracks - slide guitar, cornet, trumpet, violin, and banjo. The bass lines are often provided by synthesizer, but the drumming  is mostly done with brushes . The arrangements are open and spacious; you can hear each element in the arrangement.

The vocals are what one has come to expect from a Leonard Cohen album. There's that familiar deep baritone - limited in its range, but certainly not limited in its expressiveness. The voice is even deeper now. Cohen gave up smoking a while ago (he mentions the fact in "Darkness"), and expected his voice to go up a bit - strangely, it dropped a little lower. Some of the vocals are closer to speech than song - an intimate whisper, almost. But that matches the music. And, as usual, there are the familiar female backing vocals used as lush underpinning to Cohen's singing. Cohen calls them his singing angels: on this album it's Sharon Robinson, Anjani Thomas and Jennifer Warnes; and the Webb Sisters (Hattie and Charley Webb) - part of his touring band. Angelic, indeed - offering gorgeous counterpoint to the gruff tones of Cohen's singing.

The music moves with a slow groove - there's some blues and a waltz, a shuffle and a lullaby. Cohen has always been thought of primarily as a poet putting verses to music. But he's always been very musical, and there's a loping swing that drives this stuff forward. He knows how to write a good melody. And he has impeccable taste in musical collaborators. You listen to Cohen for the words, for the insight, for the vision. But it always comes packaged in good music - a great blend. And this album is a perfect example. It will have you quickly hooked. 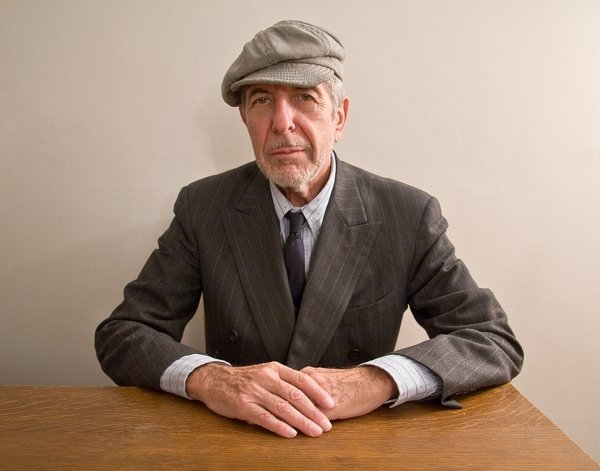 So, if you're a Leonard Cohen fan, this is one to get. An excellent album - good to listen to, thoughtful, and quite moving. Old ideas? Good ideas - delivered impeccably.