We passed the shop several times before realising what it was. It is a small enterprise — located in the San Polo district of Venice — on the main route between our hotel (Locande Poste Vecie) and the Rialto Bridge. You walk north-west from the bridge along Ruga dei Oresi and Ruga dei Spezieri. The shop is on the right. You reach it just before Campo Biccarie, the square in front of the fish market.

Speaking of fish, the shop looked like a place specialising in the sale of exotic, tropical fish. But the aquaria were only medium-sized, and they were placed low to the ground and away from the walls. Tropical fish shops are usually crammed full of differently-sized aquaria stacked along the walls in three or four rows. And there is normally a great variety of fish — all sorts of shapes, sizes and colours. The fish tanks in this place seemed to be stocked with pretty much the same species. What was going on?

The general appearance of the shop, too, was very different; it lacked the overstocked, utilitarian look I'm familiar with. Instead, it contained a limited number of aquaria, set out in a well-lit, open room, decorated with bright blue walls and a yellow floor. And the young woman in the back of the place did not look like she was selling fish — no, there was the sense of a more upscale service. 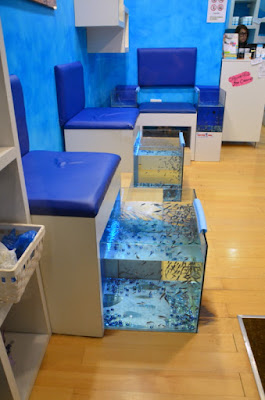 Eventually, though, the penny dropped. I stopped and peered in the window, and examined the inside of the shop more carefully. A sign on the window said (in several languages) "Please, watch from outside. Thank you." Those were padded seats behind the fish tanks. Customers were supposed to sit there and dangle their legs into the fish tanks. What? Fish pedicures, Barb explained, who had heard of this activity before. Well, I never!

After our travels through Tuscany, we came back to Venice for our flight out of Italy. Our hotel was near the airport, but on that last afternoon and evening we went back into the city by bus for a meal and a meandering walk around the city. And, at some point, there we were outside the fish place. I looked up at the sign above the shop's front window. It read Dottor Fish: Dr. Kiss Fish. Barb was interested in trying it out, but was shy about being the only one in the place — I wasn't keen! But then a younger American couple stopped at the place and quickly decided to have a go. That was all Barb needed — we followed them inside.

The attendant pointed to a sign on the wall that listed those health conditions which ruled people out from the procedure. The first step in the process was to sit at a foot bath in the back corner of the establishment and wash your feet. After a quick dry, you move over to one of the cushioned seats and sit down there with your feet resting on the far edge of the tank. Then you carefully insert your legs into the tank, so as not to upset the fish by making a big splash. Now it's a fish-pedicure for ten minutes — administered by a school of minnow-sized creatures known as "doctor fish". They busy themselves, for those ten minutes,  nibbling away dead skin cells from your feet.

The scientific name for these "doctor fish" is Garra rufa. They are also known colloquially as "nibble fish", "kangal fish" and "bonefish". Garra rufa are native to the rivers of northern and central Middle East: mainly, Turkey, Syria, Iraq, Iran and Oman. This species belongs to the cyprinidae family of tropical fish. They don't have any teeth; they feed on the phytoplankton which thrive in warm water (27-30°). Gurra rufa live for 3-4 years.

The company which runs these shops (they are franchises) claims that, as the fish nibble off damaged skin on the legs and feet, they emit a special enzyme (dithranol) which encourages the growth of softer, smoother, velvety skin. In addition to the natural exfoliation of skin, they are also supposed to stimulate "microcirculation". 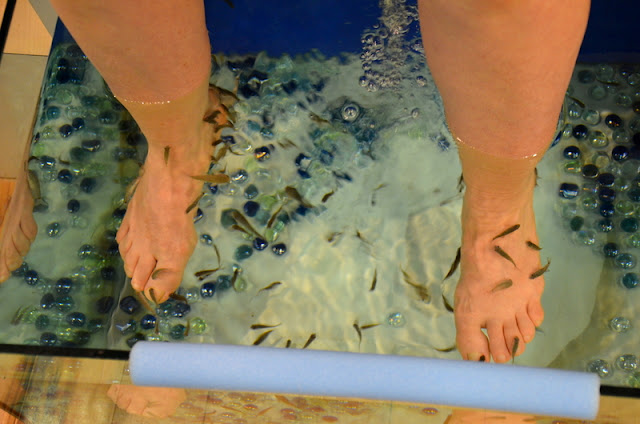 The story of how this procedure developed begins in Turkey. In 1917 a Turkish shepherd was wounded in the leg. He collapsed on the bank of the Kangal River, sticking his leg into the water to relieve the pain of his wound. The Garra rufa fish ate the damaged skin from around his wound and stimulated a more rapid growth of healthy skin. Once the cause-and-effect relationship was realised, that area around the Kangal River became a place of pilgrimage for patients with similar complaints. 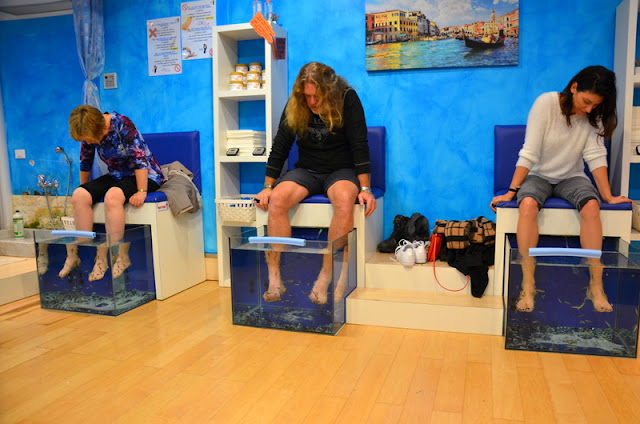 The first "fish spa resorts" were opened in 2006 in Turkey, Japan and Croatia. They quickly spread all over Asia and Europe. In 2008 two facilities were established in the U.S. And the first spa in the UK opened in Sheffield in 2010. There are now hundreds nationwide.

But not everyone is sold on this sort of "natural pedicure". The efficacy and safety of the process is still a controversial topic. Some Canadian provinces, for example, have banned the practice as unsanitary. It is thought by some health professionals that the spas spread infection: people-to-fish; fish-to-people; or people-to-people. The safety sign in the Dottor Fish shop in Ruga dei Spezieri forbids the procedure for people suffering diabetes or impaired immune systems, and those who have had recent scabs, blisters, and infections (foot fungus). 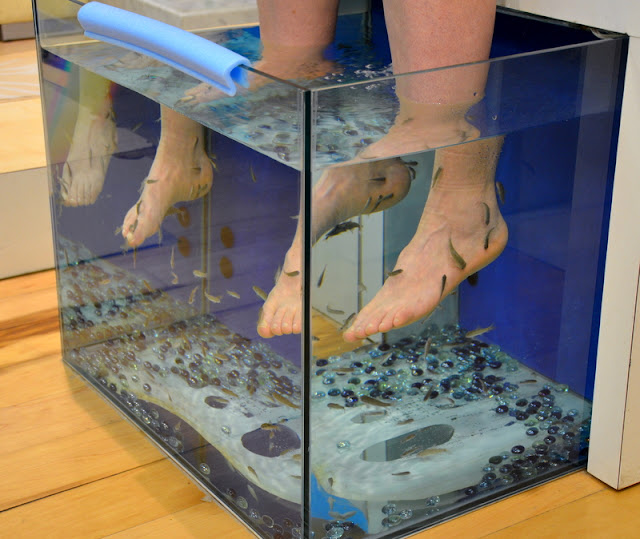 Well, Barb enjoyed the tickle of the nibbling fish, and she felt the process was effective. She gets a build-up of dried-out, calloused skin on her feet, and she thought the Garra rufa fish did a good job improving the state of her feet.

There are two Dottor Fish sites in Venice: 1) 30121 Cannaregio in the Cannaregio district (in the north-east); and 2) via San Polo 316 in the San Polo district (north-west of the Rialto Bridge).
Posted by Clive Baugh at 19:12