Photo Essay: Day Six of the Coast to Coast Walk

Summary of Route: This stage is a great relief after the rigors of the last four days. Today is definitely a recovery day. The arduous up-and-down gradients on the rocky trails of the Lakeland fells are gone; now you stroll your way across the Westmorland Plateau on grassy trails, which sit on well-drained limestone bedrock. It's mostly fields and moorland, as you pass the Howgill Fells to the south. Ahead of you lie the Pennines. 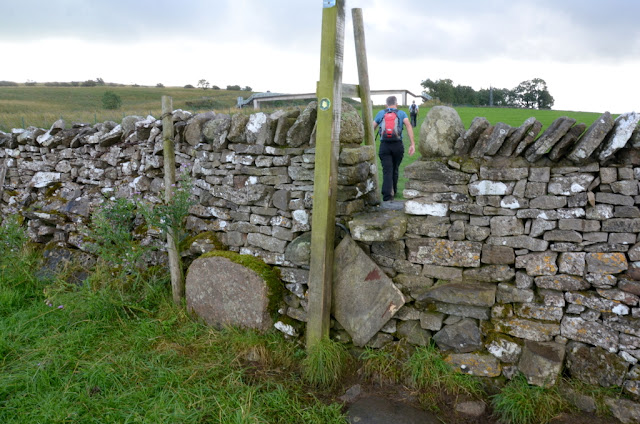 Coming out of Shap, you cross the railway line and then go over the M6 motorway. Just pass the walled village of Oddendale, a couple of hundred metres west of the trail, sit two concentric stone circles that date back to about 4000 B.C.E.

Along this part of the trail  — as you head south into Lyvennet Beck — there are lots of outcroppings of limestone pavement. Soon you turn east, and then north-east, as you skirt Crosby Ravensworth Fell to the north, and pass a cairn marking Robin Hood's Grave (not the actual grave of the legendary outlaw of Sherwood Forest). The trail descends now along a road which soon meets the B6260. Just past a preserved lime kiln, you turn right to skirt Broadfell Farm; from here, it is just under a mile to our destination, the village of Orton.

We are now outside the Lake District. Today's hike has been primarily across farm fields and meadows, and over barren moorland that is strikingly bereft of trees  —  but decorated by purple heather. A boundary-marker of this change in landscape appeared soon after our departure from Shap. We had to take an elevated footpath over the M6 motorway. As we stood above the busy motorway, we could see the outline of the Lakeland fells behind us; and to the east we could the Pennine Hills to come.

We endured wet conditions today: the fields and meadows were soggy and muddy; the moors were damp and boggy. To top it off, it was raining again at the start of today's hike (for the third day in a row), and for the second half of the walk the rain was pouring down — water was dripping steadily off the brim of my Tilley hat. By the time we got to Orton we took immediate shelter in a cafe/deli, and tried to dry out over lunch. The potato and leek soup was very welcome! Then we walked down to our B&B, the Barn House, a beautifully renovated old building. 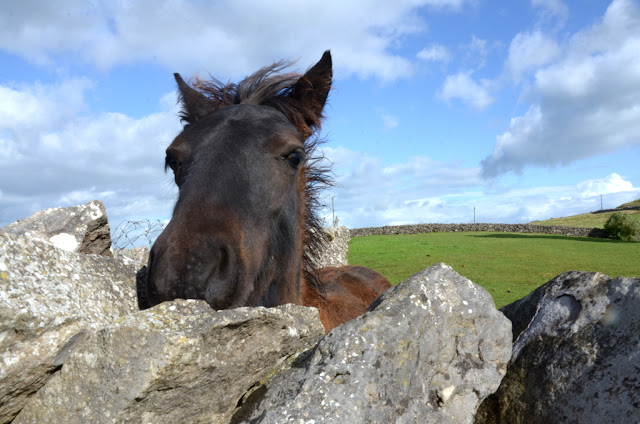 - Tony (not too enamoured with this Cumbrian stopover)

We saw some new things today. Across the moorland we encountered the skeletal remains of a couple of sheep — bones strewn across the ground — and several rabbits. The rabbit carcasses had not been fully reduced to mere bones — more recent victims, perhaps, of their predators. They would be more vulnerable out on the open spaces of the moors, with fewer places to hide. 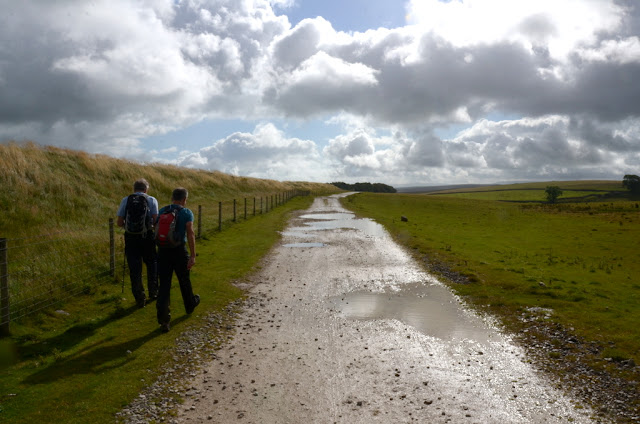 On our walk across the moorland we also saw a half-dozen outcroppings of exposed limestone. They reminded me of karst formations in Ontario. Here they are referred to as limestone pavements. These fairly small patches of grey rock contrast visually with the short-cropped green grass and the purple heather.

Today was a recovery day. After the gruelling marathon we endured yesterday, this was an easy hike: it was only 8 miles, and we had very little steep walking to deal with. We were done by early afternoon — giving us a chance to rest our legs and feet for several extra hours. We have liked what we've seen of the village of Orton — particularly the All Saints Church (I posted a dozen photographs of it on Facebook). Tomorrow we move on to Kirkby Stephen; it should be another relatively easy hike (about 12 miles over mostly level terrain).

"But in every walk with Nature one receives far more than he seeks."
- John Muir