Photo Essay: Day Eight of the Coast to Coast Walk

"I think that I cannot preserve my health and spirits, unless I spend four hours a day at least — and it is commonly more than that — sauntering through the woods and over the hills and fields, absolutely free from all worldly engagements."

Summary of Route: This is a notable day: by the end of today's hike you will have passed the half-way mark of the Coast to Coast Walk; you will have begun to cross the Pennines; you will have traversed the west-east watershed (from the top of Nine Standards Rigg, rivers will flow either west to the Irish Sea or east to the North Sea); and you will have entered the Yorkshire Dales National Park — the second of three National Parks encountered in this hike across northern England. Finally, you will have left Cumbria behind, and crossed into the county of Yorkshire (North Riding) — ending the day in Swaledale, the most northerly of the Yorkshire dales.

This stage is a couple of miles (3 km) longer than the previous one. It is quite an easy hike: the climb early in the day is a fairly gentle ascent; and the rest of the walk is either level or downhill. But the boggy and muddy conditions through most of the day can make the hiking tougher than it ought to be.

The first-third of today's hike is a steady climb up to Nine Standards Rigg. You start the day by crossing the Eden River on Frank's Bridge, on the eastern edge of Kirkby Stephen. From there you walk up to Hartley village, and then on past a large quarry and up Birkett Hill to Hartley Fell. On this fell, about five miles out from town, you face a decision — there are three alternate routes to Keld to choose from.

The so-called Red and Blue routes take you east to Nine Standards Rigg. From there the Blue Route continues east and then — just past the Craygill Sike — you head south, following the Whitsundale Beck, until you meet up with the Green and Red routes just west of Ravenseat Farm.

The Red route diverges from the Blue route just a little way past Nine Standards Rigg: instead of going east, the Red route heads south. It takes you over White Mossy Hill and down to meet the Green route.

The Green route is the simplest of the three choices. It avoids Nine Standards Rigg; and in bad weather is probably the wisest choice. It takes you down to the head of Rigg Beck, which you follow for a while and then cross. Now you walk across limestone pavement on your way down to the road (B 6270). You enter the Yorkshire Dales National Park and follow the streams of Black Scar and Ney Gill to Ravenseat Farm.

From Ravenseat Farm, you hike south over hilly meadows, following the Whitsundale Beck. The trail takes you past the Cotterby Scar, a limestone cliff next to the river. You cross the beck to the road, and walk a short distance into the hamlet of Keld.

Today's hike was not very strenuous — of average length and not too much steep climbing. But things were more difficult than they ought to have been, because of the conditions. But, thankfully, no rain today! The high ascent came at the beginning of the walk: the first three miles, or so, featured a steady climb out of Kirkby Stephen, up Birkett Hill to the summit of Hartley Fell (at a height of about 650 metres). Half way up there is a rest spot — a large bench built of rocks and stones. A bit further on there is a point of trail-diversion: you can go south on the Green Route (the shortest and easiest path); or you can go east on the blue and red routes to the Hartley Fell summit.

The place at the summit is also known as Nine Standards Rigg, because a curious monument, known as the Nine Standards, sits there. It is a collection of nine standing stones, or cairns. Both the original purpose and the actual age of the cairns is unknown: they might be designed to mark the border between Cumbria and Swaledale (they are placed just 700 metres west of the boundary of the Yorkshire Dales National Park); and they could be at least 2,000 years old.

It's difficult getting a single photograph that shows effectively the entire line of nine groups of stones. While we were there we watched two hikers who had arrive ahead of us, climbing up onto several of the cairns, despite the fact that they under constant threat of weather erosion and damage due to human interaction. They had a selfie-stick, which they put to good use. And when I got Tony to get a photo of me next to a couple of the cairns, one of them shouted, "Do you mind if I photo-bomb you". Well ...

Soon after the Nine Standards the trail again divides: you can go south on the Red Route; or make your way further east towards the Craygill Sike and the Whitsundale Beck. We decided to follow the Blue Route. The place where the Blue and Red Routes diverge has suffered incredible erosion because of the large number of boot-wearing hikers that come through this place. The black peat has been badly worn away.

The walk east across the moor is also difficult because of the large number of boggy crossings across streams and wet areas. At many places, you have to take a wide diversion around the mess, looking for a spot where your boots will not sink deeply into the mire. All through here it is wet grass, heather, and sedge.

Eventually we got to the Whitsundale Beck and began to hike south along the western edge of the meandering stream. The trail all the way down here was also muddy and buggy. And the conditions were made even more difficult by the presence of loads of midges. These are tiny biting insects who leave itchy spots on the skin, like mosquitoes. When we stopped for lunch, we crossed on to a small island in the centre of the shallow beck — hoping that the bugs wouldn't be so bad there. No such luck; the midges disrupted our peace, and the lunch-stop was cut a bit short. They continued to harass us all the way down the valley. The next day I found little bumps from the bug-bites across my forehead, up my forearms, and around my ears and upper jaw. Very annoying.

Quote of the Day:
"... drag and plant ..."
- woman at Ravenseat Farm
(explaining to Tony the proper technique for using walking poles)

A short while later we arrived at the place where the three alternate trails met. And from there we walked on to the nearby Ravenseat Farm. Here you can buy mugs of tea, or "cream teas". They also offer B&B and camping. We sat at a picnic table with our mugs of tea and struck up a conversation with a woman who had a lovely terrier with her. She was with a large group of farm-folk who were participating in a special tractor ride for charity. Just before we resumed our hike, the entire entourage went over to the tractors and prepared to resume their convoy. I waited for a few minutes, and then got some good shots of the wide variety of tractors (some of a vintage type) as they moved on.

From the farm, the trail became mostly hilly fields and meadows. We continued to follow the Whitsundale Beck. Eventually we climbed down to a road, which also paralleled the river. On the north side of the water we passed some limestone cliffs, and a couple of camping sites (including one which contained several yurts). And then we arrived at the Keld Lodge, which is located on the "main road" just south of the Keld village. 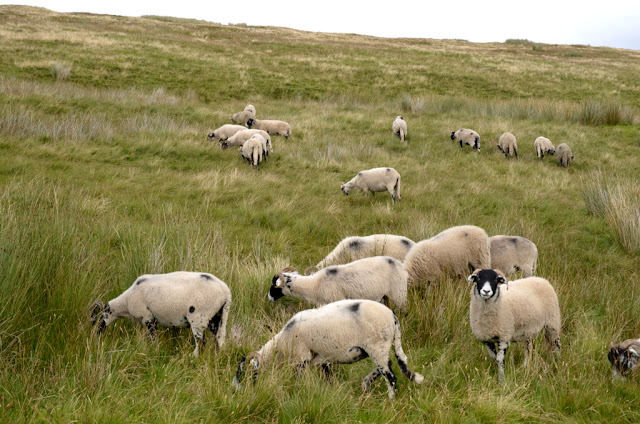 The Keld Lodge featured a hot "drying room" — designed primarily to dry out all the muddy and wet hiking boots arriving each day. I took advantage and washed two shirts, two pairs of socks, and my mud-covered rain pants (trousers). They were nice and dry by the morning.

Oh, and we enjoyed a complimentary meal at this hotel, courtesy of our accommodation-arranging company — because of the mix-up in Kirkby Stephen the previous night.

"The true charm of pedestrianism does not lie in the walking, or in the scenery, but in the talking. The walking is good to time the movement of the tongue by, and to keep the blood and the brain stirred up and active; the scenery and the woodsy smells are good to bear in upon a man an unconscious and unobtrusive charm and solace to eye and soul and sense; but the supreme pleasure comes from the talk."
- Mark Twain 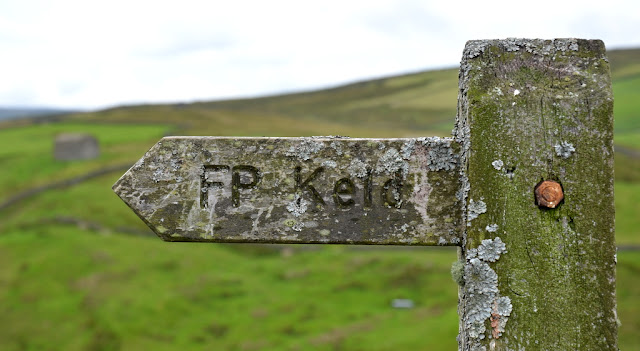