Photo Essay: Day Nine of the Coast to Coast Walk

"The civilized man has built a coach, but has lost the use of his feet."
- Ralph Waldo Emerson

Summary of Route: Today's stage is simple in concept: you hike further east across the Pennines  from Keld (on the western end of the Swaledale valley) to Reeth (on its eastern end). Almost immediately — on the eastern edge of Keld —  you intersect the Pennine Way, which runs south-to-north along the spine of northern England.

But to get to Reeth, you face a choice of alternate routes near the beginning of the hike — just like the previous stage. This time, however, there are only two options, instead of three. You can opt for a higher route, across hills and moorland; or you can choose a low route which takes you right through the beautiful and picturesque Swaledale valley.

The high route is rugged and wild — with lots of opportunities to see wildlife. There are also interesting historical sites to see — archaeological evidence of prehistoric settlement, and the ruins of lead mining that flourished here in the 18th and 19th centuries. There are the remains of the Swinner Gill Smelting Mill, for example, near the beginning of this high route (at East Grain), and the extensive remains of the Old Gang Smelting Mill, about half way along. There are also some scenic ruins at Blakethwaite, in the Gunnerside Beck valley.

The high trail goes east across the Melbecks Moor, the Reeth High Moor and the Reeth Low Moor, following the streams of the Old Gang Beck and the Barney Beck. Further evidence of the lead mining is seen on the moors in the stripping of topsoil  by water gullies ("hushes"). The gullies were channelled through here to expose the minerals. The high route meets the low one just west of Reeth.

It's going to be a tough choice of route: the historical interest and wild attraction of the high route competes with the lovely villages along Swaledale of the low route. If you're keen to see a perfect example of the picturesque attractions of the Yorkshire Dales, here it is — presented as a level and leisurely stroll through the valley.

The low route is a lovely, easy stroll along the valley, passing the beautiful villages of Muker (one of James Herriot's favourites), Gunnerside (which has an old smithy — with attached museum), and Healaugh. The two routes meet in Reeth village.

Today was an easy hike along the Swaledale valley. We chose the low route, in order to enjoy the beauty of the hamlets spread out along the northern side of the River Swale. It would have been even better (especially for photographs) with sun, or sunny periods; but the sky was overcast all day, and we had to put up with several rain showers.

On the trails of the Coast to Coast Walk you meet different types of travellers: most of them. of course, are hikers; but we have also met cyclists (some in the most unpredictable places — on paths you wouldn't imagine a bicycle should be), runners, and motorcyclists (on some of the secondary roads we have walked along or crossed). Older people are usually in pairs; younger people are often in groups of four or five. We've met larger groups involved with the Duke of Edinburgh awards. And, occasionally, there are family groups. Once in a while, there are individuals who brave the trails alone. One can only imagine the extra mental strength required to engage in long-distance hiking alone. 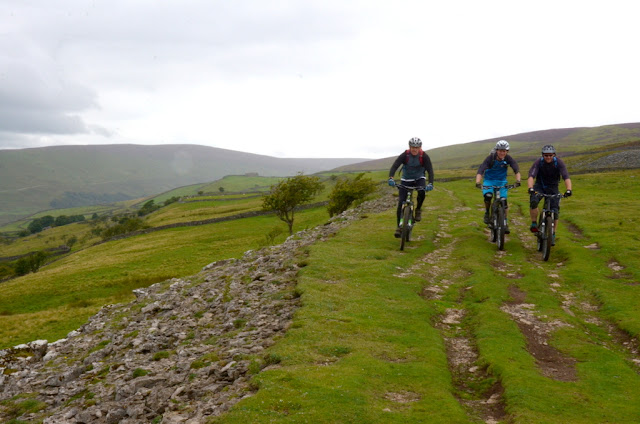 There were lots of ruined stone cottages and farmhouses along the valley. They must have been very isolated back in their time — probably the homes of sheep farmers. We also noticed some attractive stone bridges arching high over the Swale river, and some quirkily-designed, and narrow, footbridges over the rivers and streams.

Invariably you lose stuff on a holiday. So far, I've managed to hold on to all my stuff; but today, when I got to the village of Healaugh, I noticed that my camera's lens hood was missing. Not too much of a disaster, but I do rely on the hood to protect the front of the lens and UV filter from being damaged. Sure enough, later on — probably crossing a stone stile — the filter got scratched. Bu it doesn't seem to effect the quality of the images my camera is capturing.

Quote of the Day:
"I reckon we'll get there ... when we get there."
- Michael (responding to Clive's query for an ETA)

You see some quirky signs along the Walk, as you hike through villages and towns. If I see one that captures my interest, I'm sure to take a photo. The English tend to be more creative and more wacky in the signs they post in shops, mount on street walls, or business premises.

At the end of a day's hike, we usually have two or three hours of solitary time before we meet again for dinner. First thing to do is to wallow in a hot bath, or have a long shower, if a bath tub is not available. Then I take the memory card out of my camera, and transfer the day's photographs to my laptop. Then I cull them, selecting about 25 shots that I might put on the day's blog post. This selection is transferred in a folder to Picasa, where I do a bit of editing (usually cropping and adjusting the contrast for certain images). These pictures get transferred back to my Pictures folder as "Picasa exports". And, finally, they get inserted into the blog posts user blogger.

Michael has pre-booked all the evening meals. The selection has been interesting. Most of it has been "pub grub", but we've also had Indian and French. I've had some local delicacies, that I've not experienced before — like Cumberland Sausage, and Steak and Ale Pie. And, of course, there are plenty of local ales to imbibe along with the food.

Tonight, for example, at the Buck Hotel in Reeth, I had fish and chips. A large portion of beer-battered haddock. The local favourite ale is Copper Dragon — of which we sampled a couple of pints each. A good way to end the day. And I struck up a conversation with one of the musicians for a duo called Crackpot. We listened to them play for an hour, or so, before retiring to bed.

"We live in a fast-paced society. Walking slows us down."
- Robert Sweetgall 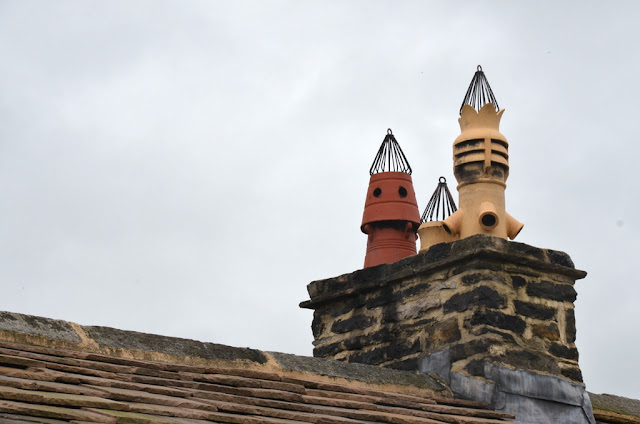