Photo Essay: Day Twelve of the Coast to Coast Walk

"In the morning a man walks with his whole body;
in the evening, only with his legs."
- Ralph Waldo Emerson

Day Twelve: from Ingleby Cross to Great Broughton (12 miles/19 km)
Summary of Route: After the rather humdrum, level hiking of the previous day, you now face lots of up-and-down walking again, because this stage takes you out of the Vale of Mowbray, and up into the North York Moors National Park — the third of the impressive national parks encountered on the Coast to Coast path. This park is reputed to have the World's largest expanse of heather; but whether you are able to spend some leisurely time admiring the flora and fauna, or enjoying the long vistas looking north and south, will depend on the weather.

From the Park House B&B in Ingleby Cross, you take a horseshoe path (south and then north) through Arncliffe Wood. At the hairpin bend, where you turn north, the Coast to Coast path crosses the Cleveland Way. The Cleveland Way National Trail is a 110 mile (177 km) walking trail that follows, more or less, two-thirds of the border of the North York Moors park (around the western, northern and eastern edges). It was the second National Trail established in England and Wales — officially opened in May 1969.

From the intersection of these trails, it's a two-mile hike north-east across moorland (lots of heather!) and along road. Then the trail veers south-east for awhile, until you arrive at Huthwaite Green. Ahead is a steep climb up through woods onto Live Moor. After a brief dip, it's another ascent, bringing you to Carlton Moor, home of a gliding club, a runway, and lots of paragliders (watch your head).

Just before the trail descends steeply around a quarry to a road, you get an impressive vista looking north and east, towards Middlesbrough and the North Sea. You cross the road and begin another steep climb up to Cringle Moor. You follow the edge of the Kirby Bank, and then deal with another steep descent. At the bottom there is an intersection with the Cleveland Way; and here you leave the Coast to Coast path and turn north. It's a 1¼ mile (2 km) walk to Great Broughton — unless your hotel or B&B sends out a car to pick you up in the lay-by below Clay Bank Top.

Today was our first hike inside the North York Moors National Park. We entered it almost immediately after leaving the Park House Country Guesthouse — the lovely B&B we stayed at on the outskirts of Ingleby Cross. The North York moors — dominated by purple heather — are spread out over the Cleveland Hills. 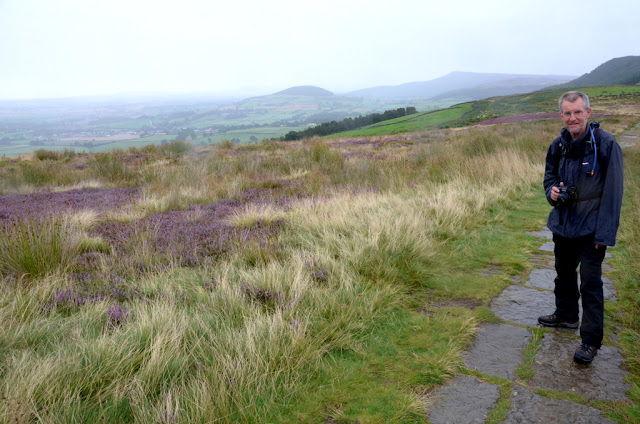 The Hills provide a regular series of steep ascents and descents each day within the Park. The first one comes at the very beginning of the day, as you climb around the Arncliffe Wood, up to the Scarth Wood Moor.

For much of today's walk, the Coast to Coast Walk is following the Cleveland Way around the northern edge of the National Park. We were traversing heather-clad moors and dealing with high spots along the way.

It was wet on the hike for most of the day. We were rather soggy by the time we climbed down from Clay Bank Top and met the car that took us to our hotel.

Quote of the Day:
"Cloud-Hidden, Whereabouts Unknown"
- Clive in the cloud along hasty Bank
(channelling Van Morrison -- Morrison was quoting Alan Watts, who in turn was referencing the Zen poet Jia Dao)

One of the things that really caught my attention today was the excellent job that was done in laying out stone slabs along the hiking path. It got me wondering what groups planned and organised the long and difficult work of creating these amazing paths. It was the same in the Lake District: how many people were involved in building the stone steps that rise steeply up the side of the fells; and how many years did it take to complete them? It really is quite amazing.

We had lunch at the Lord Stones Cafe. It gave us the chance to dry out a bit. But right after that, we got back on the trail and immediately faced more rain. We had to walk up Cringle Moor, passing Kirby Bank, towards the steepest point of the day, which featured an impressive set of rock outcropping known as the Wain Stones. These are located on the west end of Hasty Bank. As we moved further east from there, we were surrounded by cloud. We were drenched by constant drizzle, and could only see a short distance in front of ourselves. "Cloud-Hidden, Whereabout Unknown" popped into my head, and I began singing it to myself.

Hasty Bank seemed to go on for an age, especially because of the nasty weather conditions, but eventually we reached Clay Bank Top and made a rapid descent down to the road. We waited for a while in a lay-by; soon a car showed up and took us to the Wainstones Hotel in Great Broughton. Boots, rain gear, and trousers spent the night in the hotel's "drying room". 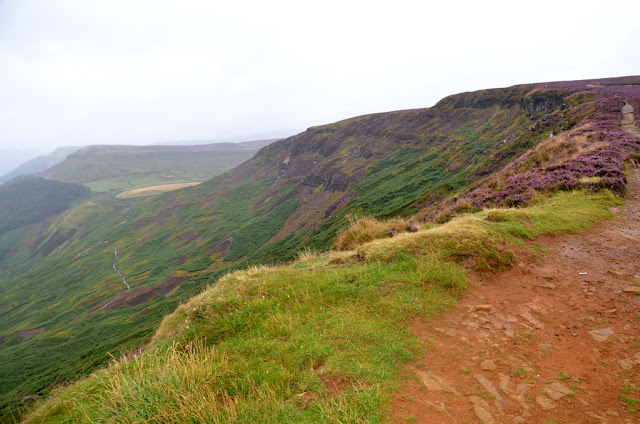 "As a nation we are dedicated to keeping physically fit
— and parking as close to the stadium as possible."
- Bill Vaughan