Photo Essay: Day Three of the Coast to Coast Walk

"An early-morning walk is a blessing for the whole day."
- Henry David Thoreau

Day Three: from Rosthwaite to Grasmere (9.5 miles/15 km)
Summary of Route: The third stage (the second stage inside the Lake District National Park) is a classic Lakeland hike — wonderful, as long as the weather is good. And it was for us today: sunny and clear in the early morning; and a little cloudy in the afternoon — but that would provide a relief, when the sun was hidden behind a cloud.
The hike begins with an easy stroll — as you leave Rosthwaite through the fields beside Stonethwaite Beck. When you reach Stonethwaite, you join Greenup Gill, which can be a long torrent of white-water and waterfalls, if there has been a lot of rain recently. And it was for us today. As you climb higher, you will get impressive views behind you of Borrowdale. The steep climb upwards takes you past Eagle Crag and onto the top of Lining Crag. If the weather cooperates, you will get spectacular views of Scafell and Lakeland, looking west to the coast. Soon you reach Greenup Edge, the highest point on this stage.

From here you begin a descent into the Wythburn Valley. When you reach Far Easedale, you face a choice of route: you can take the valley walk, which follows, first, the north bank of Easedale Beck, and then the south bank, and, finally, the north bank again into the village of Easedale. The trail turns north, and it's a short walk into Grasmere village.


Instead of the valley path, at Far Easedale you can choose the high-level route, which is what we did. It added a couple of hours to our hike, but when we told at the hotel in Rosthwaite that the hike to Grasmere would be a mere four hours, we decided to take the more interesting (and arduous) high route. It takes you up and over Calf Crag, Moment Crag (there is a great view down from here of Grasmere), Gibson Knott, and Helm Crag (which offers a 360° vista over the fells). From here it's a steep descent into Easedale and Grasmere.

Today was another wonderful day. The weather was perfect: clear and sunny in the morning, when we were low down and following the river; and rather cloudy in the afternoon, when we were exposed on the high fells — so the UV light was reduced and the heat was dissipated.

This stage was considerably shorter than the first two hikes. They told us at the hotel in Rossthwaite that this stretch would take only for hours. Well, yes, if you take the low valley route for the last half of the walk. But we chose, instead, to venture up onto the high route on the fells. After Wyth Burn we climbed up the steep slope to Calf Crag. For a short while, we had to abandon use of the walking poles, and use our hands to help pull us up a very narrow, rocky, and wet section (a small stream of water was flowibg down over the rock — making it even more tricky. But at the top we could look back at the way we had come — along the trail that ran along the west side of Stonethwaite Beck. The high route was a walk along the ridge high above the valley. After Calf Crag, we continued on past Moment Crag and Gibson Knott. The trail seemed to go on forever. Finally we climbed up and over Helm Crag — on its north side we got a spectacular view of Grasmere Lake and the village of Grasmere way below us. But the climb down, after more than five hours of steady walking, was a long and tiring descent.


Today was a very boggy day. Once we were up and over Calf Crag, the trail from there to Helm Crag, about four or five long miles, was strewn with intermittent boggy patches. Hiking boots were essential — judiciously placed rocks were helpful too in negotiating the worst patches. 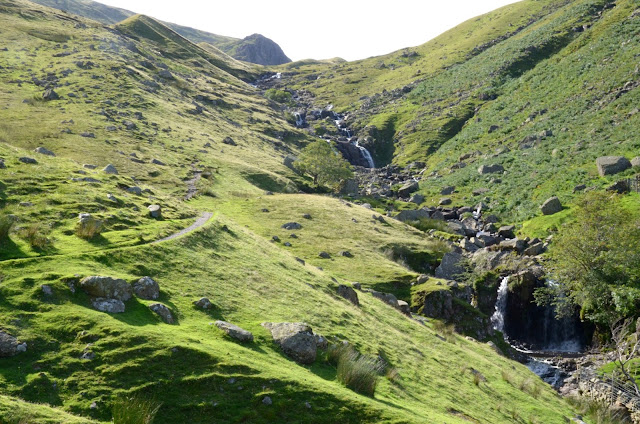 Quote of the Day:
"This is about finishing the walk, not the walk finishing you"
- Michael 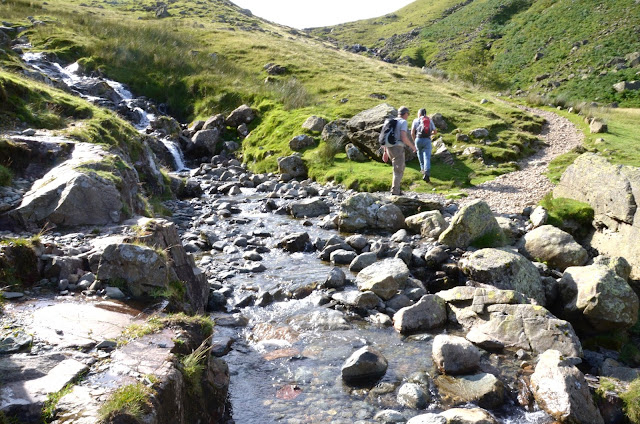 Getting lost on the trail can be a common occurrence on the Coast to Coast Walk — especially in the Lake District, where they don't employ the continuous use of blazes that I am familiar with on the Bruce Trail in Ontario. The Henry Stedman guidebook we are using has detailed instructions on how to stay on the trail, but there are still moments when one needs to stop and carefully compare landscape to maps. We have lost our way twice so far: on Day One, just before we got to Dent Hill, we took a wrong turn and had to double back — adding about twenty minutes to the Walk. It is a common sight to see a group of five or six Coast-to-Coasters huddled over a map or guide book, trying to fathom out the correct way t proceed. 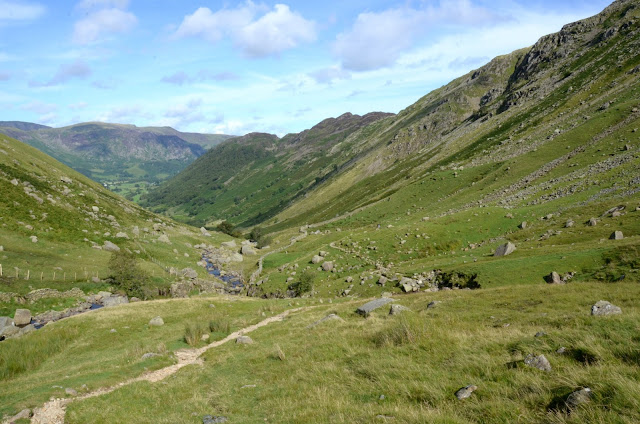 Although my legs were still sore today, I was more concerned with my feet. For the second-half of the hike, I was worried about getting blisters. I thought perhaps the preventative "moleskin" plasters I am using to cover the reddened pieces of skin had shifted. I began to imagine I had two or three blisters by the end of the day, but it turned out not to be the case. there is one incipient blister on the underside of one big toe. But I hope to prevent it breaking by the continued use of plasters. 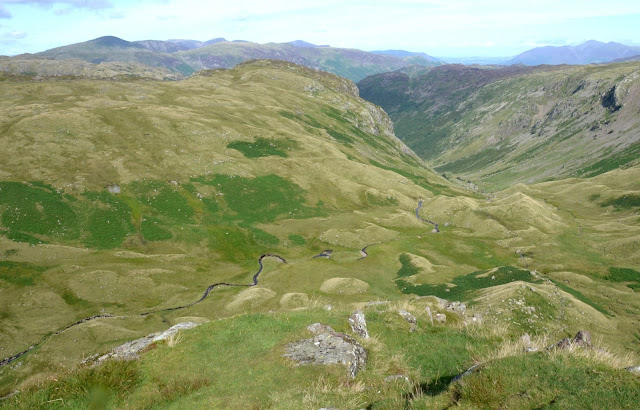 Despite these minor problems, and other aches and pains, the three of us are feeling very good  — and confident of making our way successfully on this grand adventure.

Tomorrow, we walk from Grasmere village to Patterdale — more dramatic vistas and high fell-walking through the spectacular landscape of the Lake District.

"There is nothing like walking to get the feel of a country. A fine landscape is like a piece of music; it must be taken at the right tempo.
Even a bicycle goes too fast."
- Paul Scott Mowrer


Dedication
This hike is dedicated to Bill and Barb Cannon.
(see the end of my blog post for Day One for details)