Photo Essay: Day Four of the Coast to Coast Walk

"A vigorous five-mile walk will do more good for an unhappy but otherwise healthy adult than all the medicine and psychology in the world."
- Paul Dudley White

Summary of Route: If you ignore the alternative high-routes, and take the low Grisedale Valley route, this will be the shortest of the Coast to Coast stages. The highest route, up and over Helvellyn, will add two hours to your hike.

From Grasmere, the trail leads to a footbridge at the  bottom of  Great Tongue. Here you face a choice of route: the steeper (western) alternative follows the Little Tongue Gill; the slightly milder gradient (on the east side of Great Tongue) follows along Tongue Gill. These alternate paths meet just above a waterfall. You keep climbing, and soon you arrive at the scenic mountain lake called Grisedale Tarn.

And now you face another choice — there are three alternatives this time: an easy hike through the Grisedale Valley; a high-route on the south side of the valley, along a ridge that rises to St Sunday Crag and The Cape (at 841 m), before descending to Glenamara Park; or the even-higher trail along the northern side of the valley, which ascends to Helvellyn (at 950 metres, it's the third highest peak in England, after Scafell Pike and Scafell) and drops a bit before reaching a very narrow ridge at Striding Edge.

Some people argue that the St Sunday Crag hike offers better vistas than the Helvellyn alternative, even if it is not as exciting — for many, the best views of the entire Coast to Coast Walk. At The Cape you can get a view stretching out over the next day's objectives: Angle Tarn, Kidsty Pike, and Haweswater. And, apart from the impressive views, this route offers a much easier climb up and down the ridge.

The climb on the other high route, up and over Helvellyn, is an arduous one, and the narrow ridge at Striding Edge can be nerve-wracking, especially when the wind is blowing. But Wainwright extols the virtues of this particular stretch of the trail: he calls Striding Edge "the best quarter mile between St Bees and Robin Hood's Bay." And it was his climb to Helvellyn during his first visit to the Lake District in 1930 that got him hooked on fellwalking in Lakeland. So the extra distance and time (two more hours) required to negotiate this dramatic piece of hiking ought to be well worth the effort.

The three alternate routes meet close to each other at Glenamara Park. From here you get good views of Patterdale village and Ullswater. And then it's a short walk down into Patterdale.

Today's hike was dominated by the weather. We have been lucky so far to have had lots of sun, or periods of sun mixed with cloud, and sometimes overcast skies. But no rain — until today. Last night, when we were coming back from the restaurant, it was raining; we had to dash to avoid getting too wet. It continued to rain overnight, and it was still raining when we came down for breakfast. So, just before leaving we donned our rain gear — light jackets (with hoods), pants (trousers), and waterproof covers to pull over our backpacks.

The rain kept coming down for the first 20 minutes of the walk, as we followed the A591 north-west out of Grasmere. But it stopped soon after we turned east off the road and began a long hike up a bridleway beside the Tongue Gill stream. For the next few hours the trail was wet and slippery, with shallow water running over the stones, rock and gravel. All along the route the brooks and streams cascading down the fells were engorged with extra water from the extended rainfall — creating sustained stretches of white water and impressive waterfalls. And the rocks that usually help one in fording over a stream crossing the path were virtually covered by the rushing water, making one's footing a little tricky — you had to take your time.

We reached a trail-divide at a footbridge and took the path that cuts east around Great Tongue, following the Tongue Gill stream. The climb got steeper, and we continued to watch our step over the slippery rocks that have been placed to assist your climb upward.

Quote of the Day:
"May the force be with you"
- Michael
(in the Lake District the term force refers to rapids or waterfall)


At the top of our climb we reached the Grisedale Tarn — a small lake created by glacial gouging of the upper fells. The wind was blowing strongly and there were whitecaps flowing rapidly eastwards over the surface of the lake. We hiked to the eastern end of the tarn and prepared to begin our descent down into the Grisedale Valley. And then the wind picked up — to almost gale-force power. The waterproof cover wrapped around Michael's backpack was ripped off by a large gust of wind and was blown across the sodden grass towards the stream. Michael left the trail in hopes of retrieving the cover, but the wind sent it rapidly down the valley and it disappeared. Michael gave it up for lost. Tony and I provided some brief grief-counselling, and the issue — Michael conceded — had gained some closure.


As we continued down the path, we were continually buffeted by some incredible blasts of wind. Many times I had to plant myself firmly, using the walking poles as a means to keep my balance. The problem was made worse by the very wet rocks we were clambering over, and the fact that we were working our way fairly steeply downhill. When it came time to choose one of three alternate routes down to Patterdale, following the Grisedale Beck, we did not hesitate to avoid the two high-ridge routes, and chose instead the easier path through the valley. We could see some of the ridges immersed in cloud, and the wet and extremely windy conditions made the high routes too hazardous. Taking the low route made this the shortest stage thus far, and we reached Patterdale by 1:30 p.m. — only four-and-a-half hours of hiking.


I became especially aware today of the familiar patterns that one's thoughts and feelings go through when you are engaged in long-distance hiking. At  times you feel great — touched by exhilaration at the challenge, and full of the physical delights of breathing fresh mountain-air and feeling the sun on your skin and the wind in your face. But then you experience moments of doubt and anxiety: what the hell am I doing? — can I really get all the way through this challenge? Your mind focuses, in turn, on different aches and pains — the sore spots on your feet, that you think might become blisters, the aches in your leg muscles, the small pain above your left ankle caused by a  too-tight boot. And so it goes — alternating feelings of confidence and concern.

All of our overnight accommodations have promised wi-fi connections. Already the situation at two locations has been disappointing — limited access, and sometimes only in certain areas of the building. I couldn't complete and upload the previous blog post from Grasmere because of that. Fortunately, today's B&B has an excellent connection and I've tried to complete my reports for Day 3 and 4 here.

Tomorrow we do the final stage inside the Lake District National Park. We are going to walk from Patterdale to Shap. When we arrive at our destination, we will just outside the eastern boundary of the Lake District. The final day of steep hiking up and down the fells. 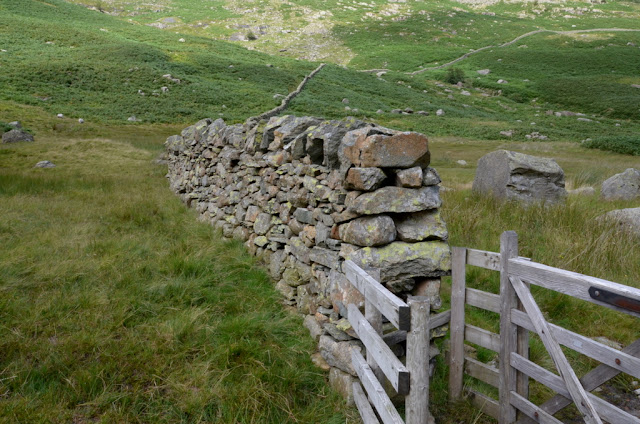